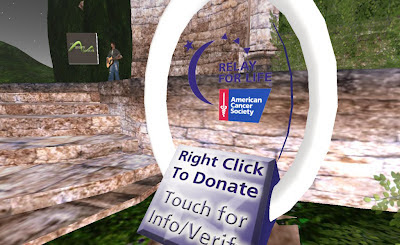 I'm trying to imagine how I could be happier after my first live music performance back in Second Life since I came down with the flu and then pneumonia back in mid-March. I suppose a bikini-clad supermodel could have come by during my show with a copy of my Grammy nomination and a tray full of sushi, but apart from that, it went as well as I could have possibly hoped.

I arrived at the 2012 Relay for Life Fantasy Faire pretty early, mostly because I knew it tends to be a bit laggy there and I didn't want to take a half hour to make it to the stage. It was good, since I got to see my friend Rapture Damone performing in the slot before me, and she was playing along with her teenage sons who were on bass and drums. Fun. It was then my turn to get rolling. 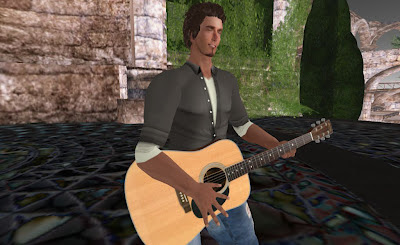 I seem to be enjoying myself. Photo by Kat. 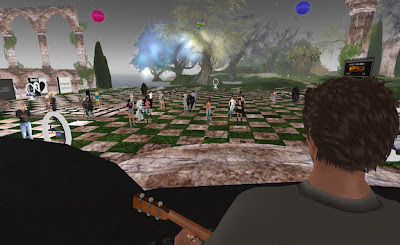 My view from the stage at RFL Fantasy Faire. Photo by Kat. 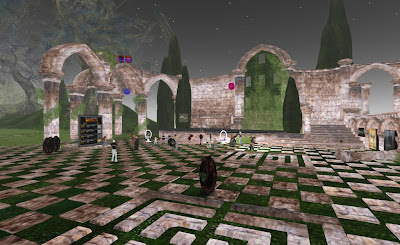 We had a great crowd comprised of extremely generous folks. Photo by Kat.

I told Kat not long ago that I only had one goal with the show performance-wise: I wanted to make it through the hour without my voice giving out on me. I mentioned that it would also be nice to not sound like a giant ball of phlegm trying to sing, and not to feel like I'd run a marathon after a few songs. Well, I have no complaints at all. My singing, while not quite up to the power and range I'd had before my illness, was fine for a typical SL show. I mostly stuck to a repertoire which didn't have me straining for high notes, and as a result, I was able to do a pretty decent job. By the end of the show, I felt confident enough to pull out a song by the Band that I had never done before, dedicating it to its singer Levon Helm, who passed away from cancer just last week.

There was a bigger purpose for this show, of course; it was for Relay for Life, the fundraising arm of the American Cancer Society. I have performed every spring for five consecutive years for this organization, and I managed to beat my record from last year by raising about L$35,000 (aka about $130 USD) during my one-hour set.

*Indicates the first time I have performed this song in SL.

Giant thanks to everyone who supported Relay for Life during my show, and throughout the 2012 RFL season. You're all terrific people!
Posted by Zak Claxton at 10:21 AM

It's genuinely great to be back, Crap. I have another RFL event this coming Sunday at Key West and am looking forward to it.