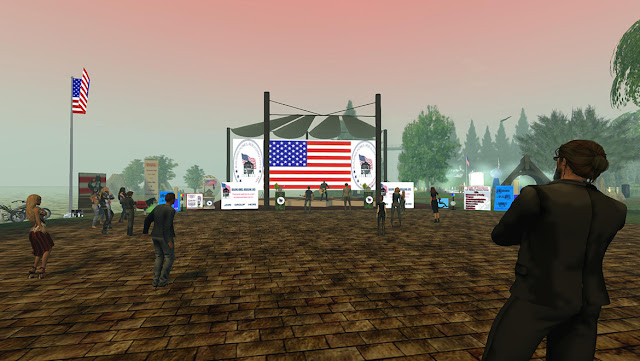 Another excellent and successful fundraising show at Veterans Isle for Homes For Our Troops. Photo by Kat.
This week is Thanksgiving, and it's very understandable that in 2020, it's harder than usual to find reasons to be thankful. It's pretty fascinating that each person's individual background and perspective plays so heavily into this matter. As I occasionally do on Monday mornings to cheer myself up at the daunting prospect of another week ahead of me, I watched the latest segment of CBS's On the Road with Steve Hartman via YouTube when I got up, and it directly addressed this dilemma.
As you can see, as trite as it sounds, things really could always be worse. Much, much worse. I remain very, very thankful that no one in my immediate family has contracted COVID-19, for example. That's not a given in this age. We have also kept our steady sources of income over this annus horribilis, while many other people did not. And, as I've pointed out many times in many ways, I am always appreciative that we live in a lovely part of the world here in Southern California.
So do I have any reason to complain at all? God, yes, I sure do! This year of disease and political unrest has been chock full of stress for just about everyone around the world. On a personal basis, I've been in varying degrees of constant pain due to a spinal issue that is something I'll still be fighting for some time. Focusing on those aspects of 2020, it would seem disingenuous to claim that everything is fine. It's not fine. We all know that.
And still... I'm alive and mostly well, and have a large clan of family and friends who are equally fortunate. I'm even thankful for things I shouldn't have to be thankful for, like the huge belly laughs I get from reading posts on Twitter pointing out the insane ridiculousness of the current presidential transition. So while things are NOT okay, I'm far better off than the majority of people around the world... something that's been true my entire life regardless of current circumstances, and something I always try to appreciate. 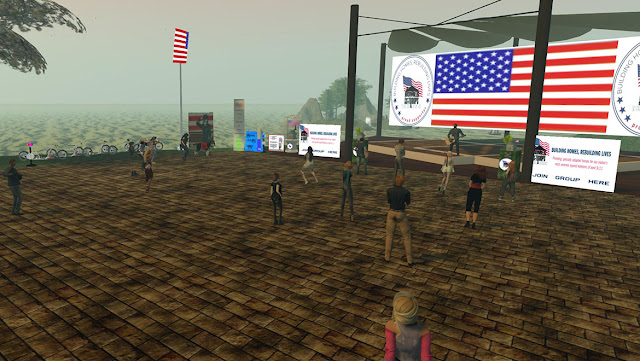 Raising some funds and keeping some healthy perspective on our respective quality of life. Photo by Kat.
Homes For Our Troops
One very clear example of that line of thought is that of veterans who've been severely injured while serving their country. On many, many occasions, I've performed at the series of benefit concerts that help raise funds for Homes For Our Troops, a publicly funded 501(c) (3) nonprofit organization that builds and donates specially adapted custom homes nationwide for severely injured post-9/11 veterans, to enable them to rebuild their lives. These shows are organized by my fellow Second Life performer Frets Nirvana.
I'll quickly address something (since I've said it before and don't like repeating myself): I am a pacifist. I think war is barbaric and anachronistic, and should be avoided at nearly all costs. That being said, the one thing for which we must assume responsibility is caring for those who've put their lives on the line and paid a huge price. Regardless of what political party is in charge or who's running the current administration, these injured vets don't receive the amount of care that's required for them to lead happy and productive lives upon their return.
Per my statement at the top of this post, if you're mired in self-pity over how 2020 has gone for you, please compare your life and lifestyle to the people in the video below. They are some of the armed services veterans who've benefitted from HFOT's mission, and the only way they're able to do so is with the support of kind and generous people like you.
The Show
I always put together a unique set list that seems appropriate for whatever venue or event I'm performing, and that's certainly true with benefit shows. As I mentioned last night at Veterans Isle in Second Life where the HFOT shows are held each month, there's one song that always makes its way into my list there, and it's Neil Young's "Comes a Time", with its lyric, "That's how we kept what we gave away." I really believe in that concept... that we gain more by giving than by taking. 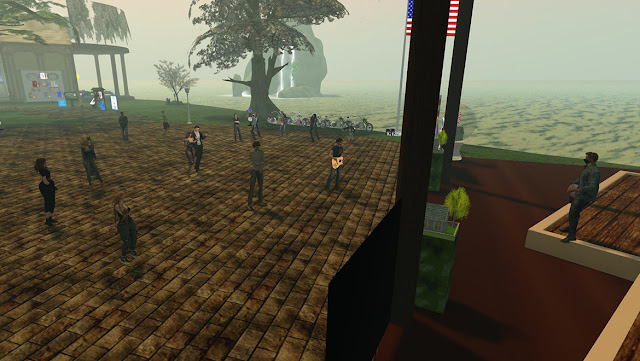 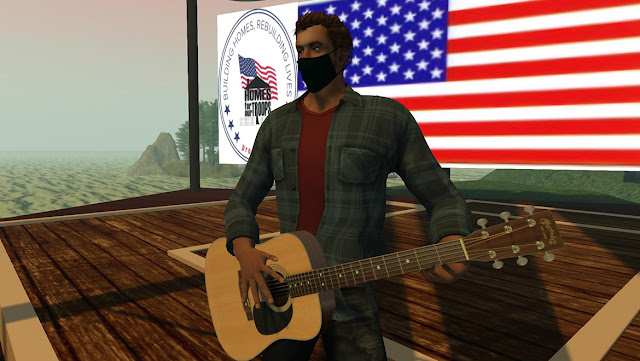 I've now worn a mask continuously in SL since March, when I started wearing one in real life. While I do understand that Second Life is a world where some people go to escape the challenges of their real lives, it's so important to promote the basic measures of preventing COVID-19 transmission that I've committed to wearing my mask in-world for as long as I'm wearing one in public in the flesh... which will likely still be for quite some time. Photo by Kat.
We had a decent crowd there, and with my not doing as many shows on a regular basis as I did previously, it seemed like a number of my Zakster fans were glad to see me back and performing live. As usual, the fundraising portion of the event seemed to be going very well, and I was glad to have helped bring a small portion of the proceeds to this great cause via the generous donations from my friends and fans.
Short side note: I don't cross paths with fellow SL musician Stratus Mactavish often. We used to both perform at the Islands of New England venue occasionally, but it had been a year or more since I last heard his set, and I'm always reminded that he's one of SL's better live musicians. I always enjoy his show when I happen to catch it, as I did last night when he performed in the slot before mine.
HFOT set list...
One of These Things First (Nick Drake)
Cat’s in the Cradle (Harry Chapin)
Long Time Gone (Crosby, Stills and Nash)
Pretty Pimpin’ (Kurt Vile)
Falling Down (Zak Claxton)
Don’t Let It Pass (Junip)
Six Underground (Sneaker Pimps)
Into the Mystic (Van Morrison)
Comes a Time (Neil Young)
’Tis Autumn (Nat King Cole)
Wildflowers (Tom Petty)
America (Simon & Garfunkel)
Huge thanks to everyone who came out to the show, with special super thanks to those who were able to give to the cause. You all are making a difference in someone's life! Here are some of the people who were in attendance and deserve kudos for their support.
Jasmyn Sugarplum, Dancing Gigi, Jax Rayne, Bri McMahon, Trouble Streeter, Sabryne Hotaling, Chacha Cyberstar, Nina Rose Setner, Kat Claxton, Ravensong Merlin, Jed Luckless, Waya Snowpaw, JameJame, Turn Pike, Firelie, Doris Johnsky, Angi Spires, and many more... especially the guy who makes it all happen, Frets Nirvana!
Posted by Zak Claxton at 9:09 AM