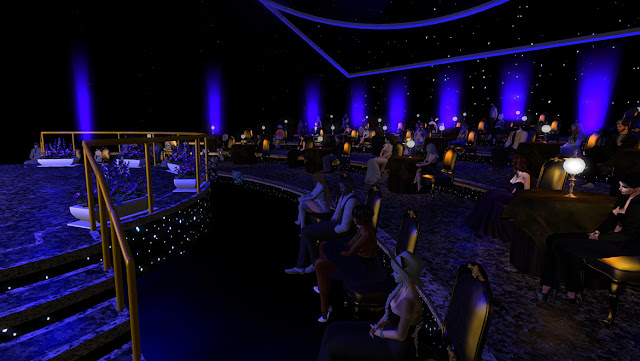 Friends and musical colleagues of Kat Vargas gather for her memorial. Photo by Kat Claxton.

Here's a show report that I wish I'd never, ever have had to do.

Kat Vargas passed away on November 1 from complications due to COVID-19. I'd been aware that she'd contracted the disease, but had expected, as I do with most people, that's she'd recover. It was terrible to learn that she'd succumbed to it. She was only 60 years old. Kat was a longterm fixture among the Second Life music scene as a fan and a manager of a number of musicians. I'm not sure who was around SL longer between the two of us -- I started in 2006 -- but it seemed that right from the get-go, Kat was a person you'd see at live music events in SL all the time.

I came to find out that she was managing a number of the most respected and popular musicians in Second Life, including my friend Maximillion Kleene. The first time I met Kat in person was at the initial Second Life Jam that I attended, in San Diego, CA in 2011. She was every bit as warm and fun and friendly -- and gropey, as I related in a story at her memorial -- in person as she was in SL.

I was informed that there was to be a memorial event in SL, and was honored when I was asked to be a part of it. I knew that as you would expect, most of the event would involve somber remembrances of our friend who was no longer among the living. But I also knew that Kat Vargas was a lady who loved laughter and fun, so I decided to try and use my portion of the presentation to serve as a reminder about the fun-loving, rather bawdy, and lovable person whom she was. 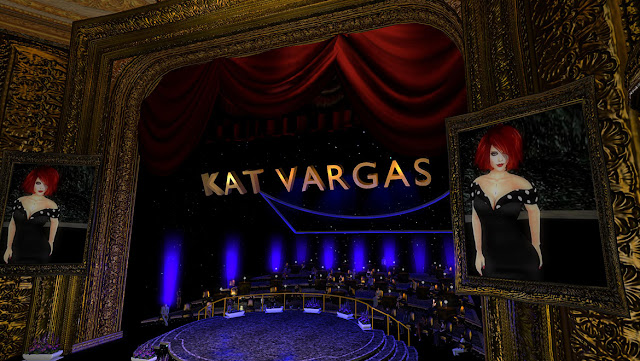 The Rose Theatre
The memorial event was held at The Rose Theatre, a very grand and beautiful venue where I'd never previously performed. The organizers of the event set it up as a three-hour tribute to Kat, including some speeches and stories, but mostly jam-packed with musical performances, which seemed very appropriate. As I mentioned while unsuccessfully trying to make my way to the stage, it's a fitting tribute to Kat's impact that so many people were present (over 120 while I was there) that it bordered on crashing SL for many of us.

No matter; I just did my show from where I happened to be, in the very back of the stage area. Everything worked out fine, and the event was touching on multiple levels. The schedule of speakers and performers allowed many friends and musicians to pay tribute to Kat over the course of the day, and included Rusty Seisenbacher, Parker Static, Fly Kugin, Mimi Carpenter, Seli Blackmore, Winter, Quartz, Agatha Nowles, Neomaximus Brandenburg, Anj Gustafson, Kris Composer, Evilynda Baphomet, and others. I know that a number of people were involved in putting on the whole event, and they did a terrific job.

Video of my performance courtesy of Diadorine Lane. Check her YouTube channel for videos of the entire event.

Goodbye, Kat V.
Since I was slated for 15 minutes, I decided to do a few tunes that would have some level of meaning for the spirit of the day. My first tune, Neil Young's "Try", speaks to the importance of spending time with loved ones while they're still around. Golden Smog's "Pecan Pie" is a thinly-veiled metaphor for being horny, and I used that tune to recall Kat's real-life groping of me in 2011. My third song was "Your Song" by Elton John, which was my way of expressing the many songs that were played for Kat V. as "her song" during her time in SL. 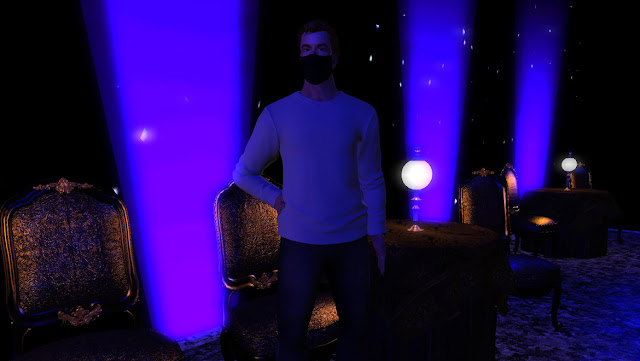 Performing for Kat V. from my spot in the back of the hall. photo by Kat Claxton.

I also mentioned during the event that anytime I looked out from a stage and saw Kat Vargas in the audience -- usually because she was with one of her artists who was up before or after me -- it was a sign that people were going to be having fun out there. Her presence as a strong supporter of the music scene in SL will certainly be missed, and she'll be missed as a person, in all of her gropey and silly fun.

Many thanks to everyone who came to Kat Vargas's memorial event, especially to the kind friends of hers who organized it. You could not have done a better job, and she would have loved it!