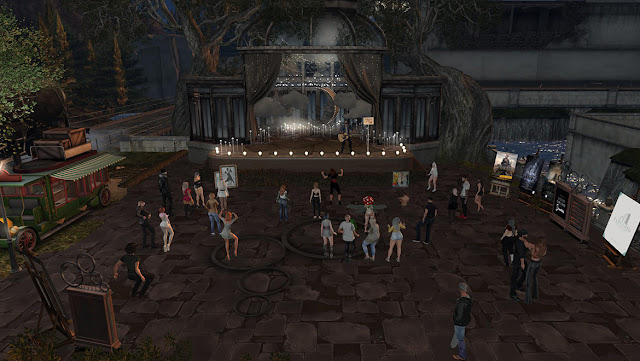 A great evening of friends and fun at Templemore. Photo by Kat.

I had a great show at Lutz City of Templemore on Sunday, but let me tell you a thing or three first, and then we'll talk about the show, if you're cool with that.

Derek Chauvin Murder Trial
Just to note for the record books, I 100% believed that Derek Chauvin was guilty of murder, and, based on the track record of law enforcement officers being held accountable for their actions, was maybe 90% expecting him to be exonerated despite what looked to me to as being guilty as could be. I was pretty anxious on Tuesday morning as I awaited what might have turned out to be yet another complete travesty of justice in the needless killing of a person of color. And then, when the jury returned and the verdict was given as guilty on all three counts, I could feel something akin to a weight being physically removed from my shoulders. 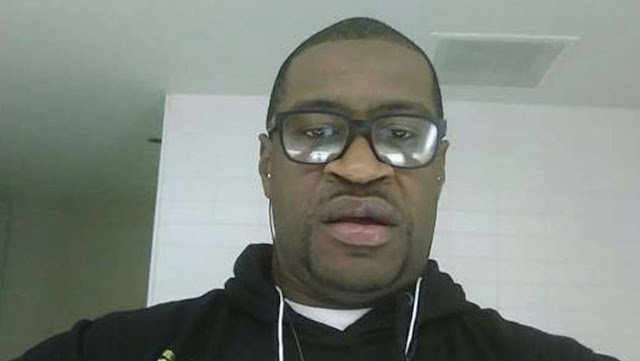 I'm not showing a picture of the murderer here. Instead, here's George Floyd who should be alive and well today if not for Chauvin's actions. We can only hope that the sentencing will be appropriate.

We still have yet to learn the sentencing for Chauvin as well as the fate of the other three Minneapolis officers involved in the killing of George Floyd, but those things will happen over the next couple of months, and I remain cautiously optimistic that justice will indeed be served. On a more realistic side note, a CBS/Newsline poll said that nearly half of the Republicans asked about the Chauvin trial felt that the guilty verdict was wrong... another clear indicator that we have a very long way to go.

COVID Report: Good Times, Bad Times
While we Americans seem to be doing pretty well with our fight against COVID-19, it's still a very premature view to think that we've won the battle... and the rest of the world is still deep in the midst of it. India is being overwhelmed by new COVID cases at the moment, with 350,000 new cases on Sunday alone (the most of any country on any day since the pandemic began). Most of the rest of the world is currently still waiting on their opportunity to get inoculated against COVID-19. But here in the USA, nearly 40% of the entire population has had at least one dose of the vaccine. 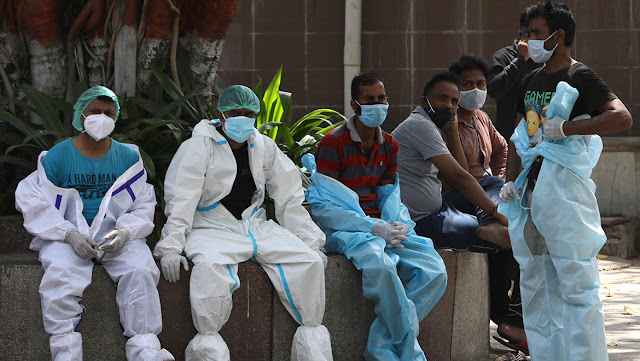 As has often been the case, Americans have a skewed perspective about how the world is doing. In this case, it's the assumption that COVID-19 is already very much under control. Ask a hospital worker in India how it's going.

I was fortunate enough to get my first dose on the very first day I was eligible, and later this week, I will be receiving my second dose of Moderna. A troublesome news item says that more than five million Americans, however, have skipped their second dose. Most of those people seem to be afraid of the side-effects reported by some with their second dose of Moderna or Pfizer vaccines. I will tell you that most of the people I talk to have had very mild side effects, and even the worse reactions are highly preferable to getting the actual virus.

Two weeks after that dose, I will be about 95% immune to COVID-19, at least the current variation, and a few weeks after that, I'll be talking my first vacation in over two years... something I'd only have done after being fully vaccinated. Can't wait! One important note: since coronaviruses do mutate in a similar way as influenza, it's likely that getting a booster shot will be a regular event in the future. The thing to keep in mind: we are moving toward a point where things are getting back to normal, and if we all do the right things -- getting vaccinated and continuing to wear masks while interacting with other people -- we're eventually going to beat this thing.

How About That Show?
I love playing at Templemore, and for this show, I had the fun of experiencing a new area of the venue called The Conservatory Stage. It was absolutely fantastic, just as all of the many stage builds at Templemore have been since day one. This is an outdoor area, but the space is defined beautifully in an intimate courtyard setting. The stage itself, with superb lighting and textures, made for a perfect backdrop as the crowd danced and made merry in front. 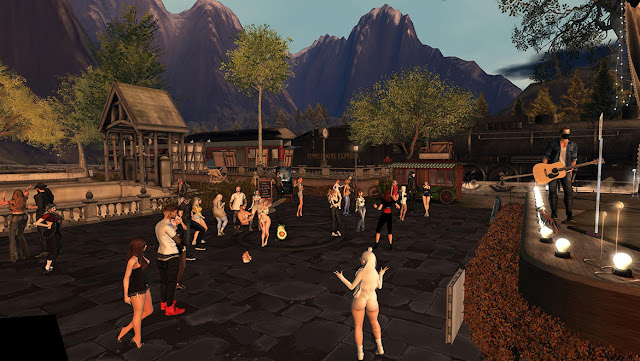 So the good news is that I got onstage just fine, but then found myself kinda stuck facing at a perpendicular from the crowd. The continuing good news is that I was able to rectify this after my first song, and actually turned to face my crowd. Good times. Photo by Kat. 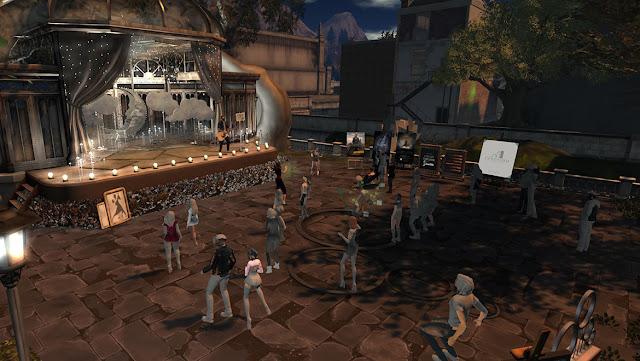 We had a great audience with a lot of people who seemed to be truly enjoying the music, which is always my favorite kind of show. Photo by Kat. 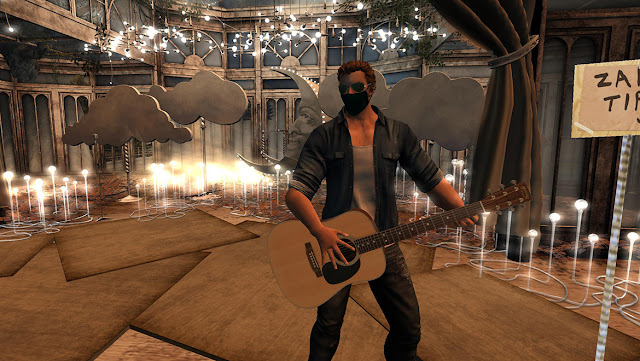 I mean, look at this stage! Tell me one place in Second Life other than Templemore that can create this kind of stunning visual environment. Photo by Kat.

I know I've said it many times before, but the designers of Templemore -- primarily my friend Luis Lockjaw -- do incredible work to make it a visual feast that goes far beyond most other locations in Second Life. I've probably performed at ten different locations in Templemore over the years, and each of them has had its own distinct vibe, with the commonality being a level of design detail that's almost unimaginable.

For this show, I didn't have a music theme per se, but I did want to do some songs that were a little more rare in my repertoire, and as usual my set purposefully went through different moods and hit multiple time frames so that pretty much everyone could find something familiar and enjoyable at the show. While I didn't bust out any never-before-performed songs, some of the tunes haven't been in my set list for over ten years, and others I'd only done once or twice before. Before the show, while warming up, I did something that I rarely do: I actually played along with a number of the songs just to ensure that I was properly capturing the vibe of the music, and I actually think it was helpful when I got onstage. 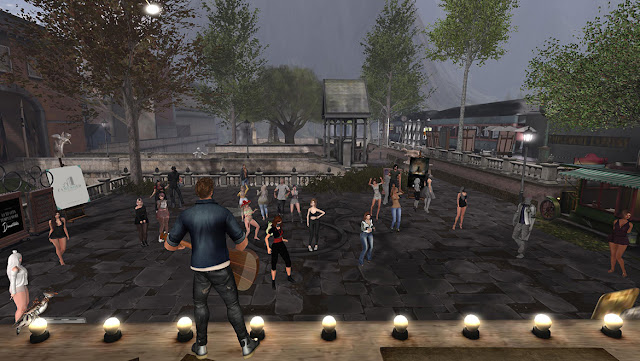 My view from the Conservatory Stage at Lutz City of Templemore. Photo by Kat. 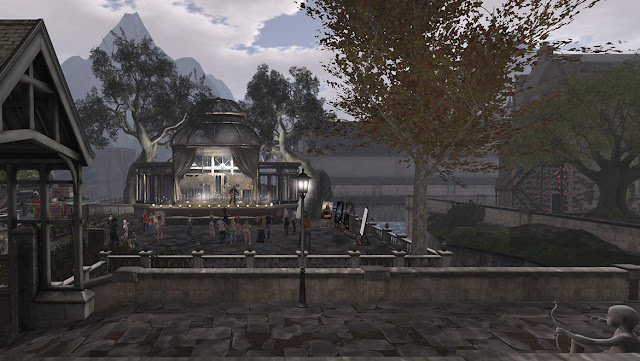 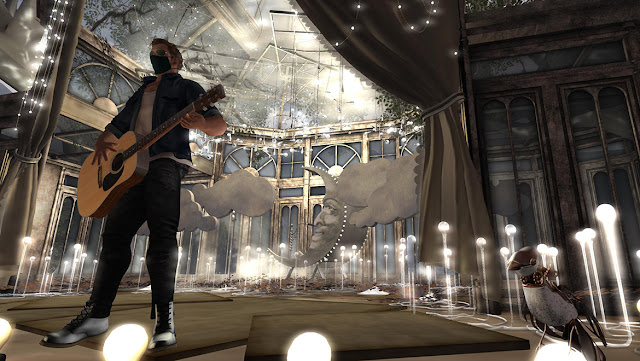 There will come a time in real life when I will be comfortable being amongst large groups of people without having to wear a mask. Once that occurs, I'll remove the mask that I've also worn in SL since the very start of the pandemic. I know that most people use SL as an escape from the challenges of their real lives, whereas for me, it's just an extension of my real life self. Either outlook is fine, but the aspect of wearing a mask to slow the spread of coronavirus is too important to me to not reinforce that message in the virtual world as well. Photo by Kat.

Big thanks to every single person who came out to the show, with special thanks to the following who helped support it!