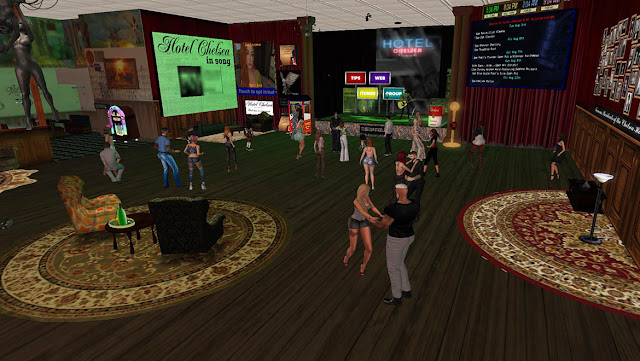 Bringing along the mellow summer sounds at Hotel Chelsea. Photo by Kat.

I always have the best intentions of writing updates to this blog whether or not I'm doing live music shows, and inevitably that takes a back seat to other things I have to do. It begs the question: do I write blog posts because I have shows to report, or do I do shows since it gives me a reason to blog?

It's too early in the morning to consider these philosophical questions, and I'm not even done with my first cup of coffee, so we'll table that for the time being. I did have a terrific show last night at Hotel Chelsea in Second Life, and we'll talk about that after some other stuff.

Welcome Back (Not), COVID
Things had been going so well. I was actually feeling a glimmer of optimism that with the huge rush of people getting vaccinated from the start of the year through June, we'd have a good chance of pretty much wiping out COVID-19 and getting back to a more fun and relaxed lifestyle by this fall.

That feeling started diminishing as June turned to July and the realization set in that a certain group of people were so deeply brainwashed that they were never going to get vaccinated. And then, the numbers started reflecting the results of their poor decisions.

Data from the New York Times. That sharp upward trend began in mid-June as COVID restrictions were lifted and people became more at ease with interacting with others in public without wearing masks. Almost all the new cases are the Delta variant of COVID-19, though that's definitely not the last mutation that will affect us.

Why Should I Care if You're Vaccinated?
This is super easy to understand, but requires a tiny bit of knowledge about how viruses work. Just a tiny bit. You're smart. You'll get this.

You know how each year, there's a new flu shot? That's because the influenza virus isn't one thing. It's a very old virus that mutates over the course of time. As you recall, some forms of the flu have been more dangerous than others. Around 1918, the H1N1 form of the flu virus infected 500 million people -- one-third of the world’s population at the time. It killed at least 50 million worldwide, with about 675,000 flu deaths occurring in the United States.

But H1N1 isn't the only form of influenza virus. H3N2, H1N2 are variants of the original flu virus, and each of them has its own mutations. It's a constant battle to create effective flu vaccines that protect people from these diseases that in some cases can still be deadly. With me so far?

SARS-CoV-2 is the name of the virus that causes the COVID-19 illness. However, it has proven to be very adaptable and quick to mutate to similar forms that might not be as effectively fought with current vaccines. Within a matter of months, the initial forms of SARS-CoV-2 had mutated to another strain that, while producing similar terrible life-threatening results, was even more transmissible due to higher viral loads in infected people. That version is currently the most predominant one around the world, and is called B.1.617.2, also known as Delta. 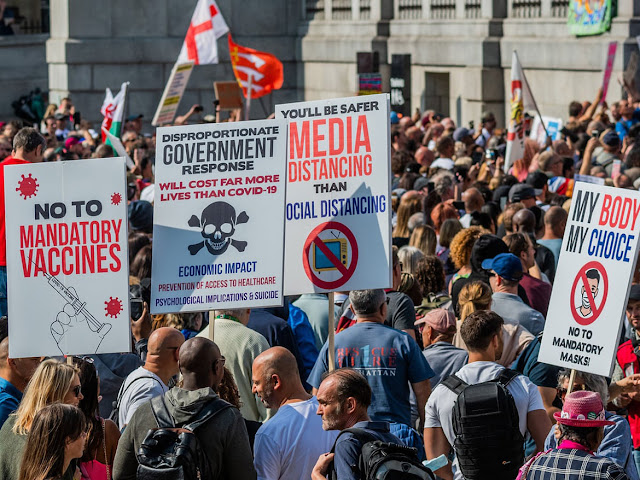 When a good portion of the world's population is sick, dying, or dead, keep in mind that we could have wiped out this disease the same way we did polio and smallpox... and these folks convinced you to do otherwise. Photo from The Guardian.

So What?
Well, Delta isn't the final form of SARS-CoV-2. It continues to mutate, and especially in areas where not enough people are vaccinated, other strains are already around, and more will be forthcoming. In addition to Delta, there are currently also variants including Lambda, Gamma, an unnamed variant known as B.1.621, and recently Epsilon forms of COVID around. 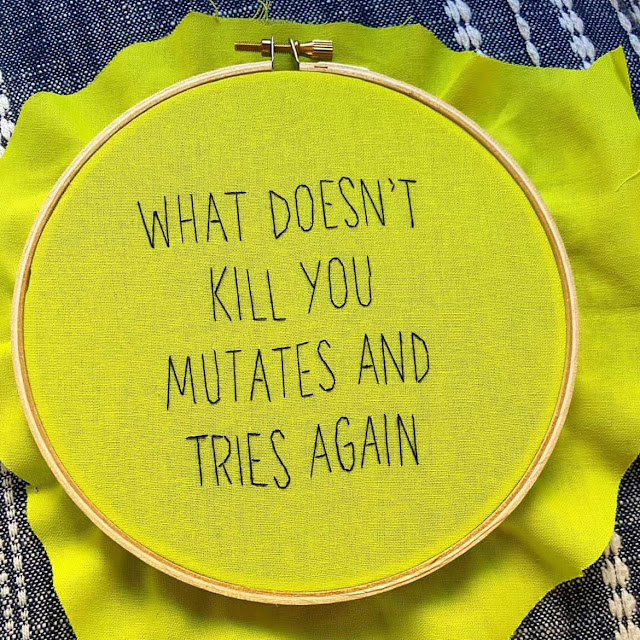 We already know that we're going to require booster shots to help protect people against these mutations. But what happens when a variant comes around that is resistant to all known vaccines? The answer is horrifying. It could be far, far worse than the current total of deaths and severe illnesses of the past 20 months. 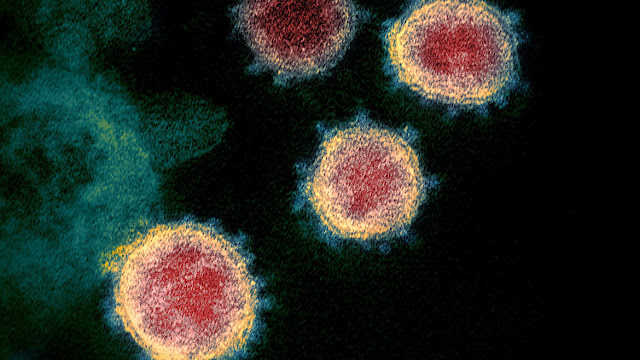 Why does your choice to not be vaccinated affect me? Because of you, the virus gets spread further and has a higher rate of mutation, and eventually my vaccine doesn't protect me anymore. Because of you. C'mon folks.

Enough on that nightmare. The point is that with enough people vaccinated, and people continuing to respect social distancing and masking, we can lower the odds of these mutations becoming widely spread. So please... get vaccinated and encourage people you care about to do so. There have been enough stories of people who wished they'd been vaccinated while on their deathbed. It's terribly sad. Do the right thing.

How About that Show?
We had a terrific show at Hotel Chelsea. I typically plan a set list a few days before any given show. The factors that go into my choices are myriad. How am I feeling? What's the weather like? What's going on in the world? How's my voice holding up? These questions all boil down to a general amorphous vibe, and I plan the set accordingly. My musical theme for this show was "mellow summer goodness", and for the most part, I stuck with songs that would be familiar to the crowd I expected at Hotel Chelsea. I have another show at another venue this coming weekend where I'll likely play more indie music and deeper cuts. It always balances out. 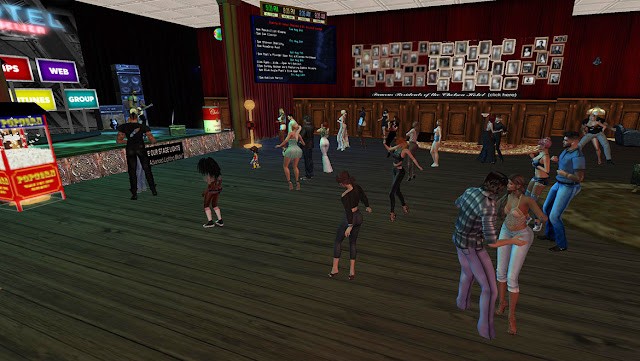 A nice big crowd, and I think more and more of Max Kleene's folks are staying for the Zak Show each time I play Hotel Chelsea. Bonus. Photo by Kat. 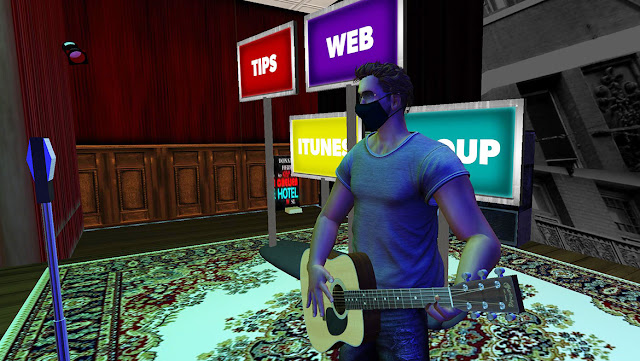 It's funny (not really) that I was kinda planning to remove my mask in SL by now. As soon as I can confidently be safe indoors in public in real life without a mask, it will come off in SL as well. Photo by Kat. 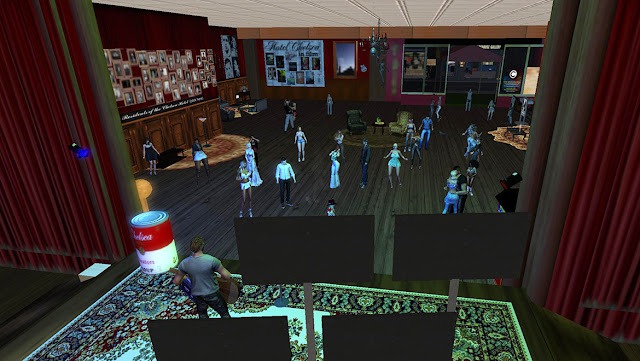 This was a really good show. Supportive, enthusiastic crowd, a set list that worked well, and my enjoying the whole thing. Photo by Kat.