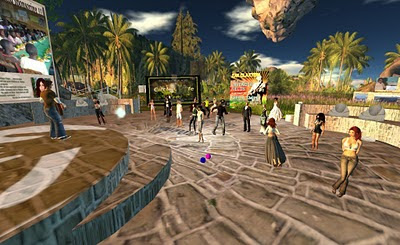 About six months ago, someone sent me friend request on Facebook, and I noted that while she was living in Germany, she came from my own town of Redondo Beach, CA. She was also a fellow resident of Second Life, and I was happy to accept the request as such. Her name was Brique Zeiner, and went by Brique Topaz in SL. But, more importantly, she let me know about something I immediately thought was very cool: she ran a live music venue in SL that had a purpose for raising funds for African children in need. 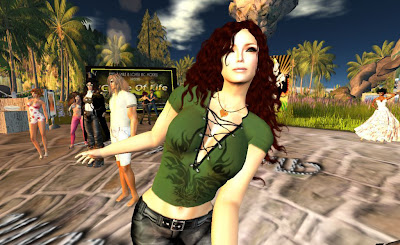 Here's Brique, who is the real hero in helping kids get food and education in Africa. She personally goes to Kenya to teach and make sure the program is running well. Photo by Kat.
Well, we hear about charities all the time, but there was something different about Brique's cause: she was personally and directly involved. Brique helps run an organization based in Germany called Live and Learn in Kenya, and its goal is twofold: to sponsor education for kids in Africa who otherwise wouldn't have the opportunity to go to school, and to make sure those kids are fed well enough to be in a position to learn. Well, I can't say how strongly I support both of those ideas. 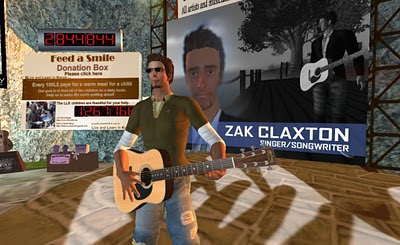 Rocking for a great cause. Photo by Kat. 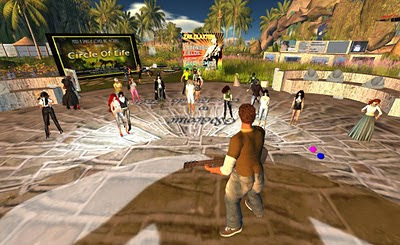 My view. Photo by Kat.
Unfortunately, life being what it is, I got busy and wasn't able to schedule something right away, but I always kept Brique and her program in mind. I made a couple of visits to the venue in Second Life where the music events were held -- Lavender Fields -- and liked what I saw there. Perhaps the real thing that pulled me over the edge to participate was the photos of the kids in Kenya who had used chalk to draw pictures and thank-you notes by hand to some of the artists who had played there, like Tukso Okey and TwinGhost Ronas. It gave the whole program a very personal touch. Plus, the basic message of what Brique calls the "Feed-a-Smile" program is very, very simple: L$100 would buy a hot meal for a kid who needed it. That's about $0.40 USD, and it was an easy way to understand how simple and effective it was to lend a hand. 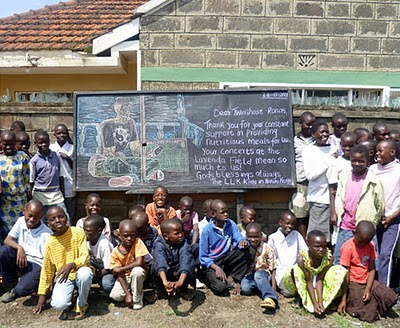 How cool is this? Unlike most other charitable causes, it's very satisfying that SL artists see very real reactions from the beneficiaries of Feed-a-Smile. Photo courtesy of Brique Zeiner/LLK.
One day, I let my manager Maali Beck know that I really wanted to schedule a show at Lavender Fields for Brique and Feed-a-Smie, and Maali set it up immediately. That's how I ended up there yesterday, and it was absolutely fantastic. TerriLynn Melody had the spot before me, so I had a nice crowd already in place when I started jamming (and we also had a few Zaksters arrive to help supplement the audience). I did what I consider to be a typical Zak Show, with the songs geared toward the theme of helping people in need (Kat actually put together the set list, and did a nice job of it).

The end result of the day was that during my hour at Lavender Fields, we raised enough donations to serve 65 hot meals to hungry kids. Hey, all I did was strum some guitar and sing, and play a little harmonica. That's what I do for fun, and at the same time, managed to make a group of kids a little less hungry. I call that win-win, in a big way. 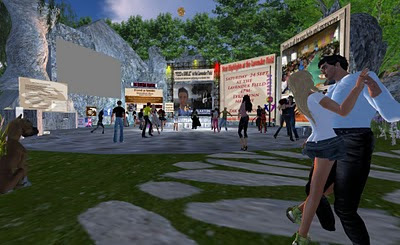 We fed some kids and had some fun. That's a great Saturday. Photo by Kat.
Big thanks to everyone who helped out some deserving kids in Kenya by donating to Feed-a-Smile! You are all heroes!
Posted by Zak Claxton at 11:26 AM