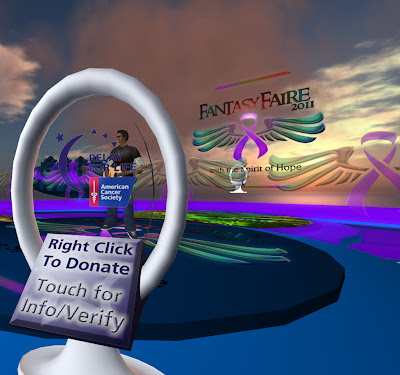 I couldn't be happier about the show I did yesterday at Fantasy Faire 2011, the big kick-off event for this year's Relay for Life activities in Second Life. Before you spend much time reading this recap, be aware that this event continues through April 10, so get more info here, or just teleport there now and check out the jaw-droppingly great builds and designs there!

Each year for the past four years, I've had the opportunity to play one or more events in Second Life for Relay for Life, the main volunteer-driven fundraising event of the American Cancer Society. It's really an honor and a privilege to take part in such a highly legitimate charitable effort, and I look forward to it each year. In 2007 and 2008, I played several kick-off events. In 2009, I played at an RFL-oriented clothing fair. In 2010, it was at the finale event, the actual SL relay, which was great.

However, I'd have to say that this year's show at Fantasy Faire was, for me, the best RFL event ever, if measured only by the most important criteria: the fundraising! During my one-hour show, over L$30,000 was raised. That's about $112 US, which isn't bad at all, especially considering that my part in it is just to sing, play guitar, and have fun. As I mentioned to the crowd yesterday (there were over 100 people listening in on the nine sims where I was performing), it's always great to play music live for appreciative audiences, but it's much more meaningful knowing that in some small way, we're making a difference in people's lives by doing so. 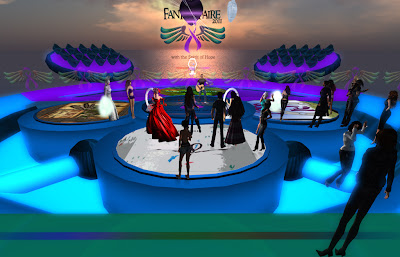 We had a terrific crowd who was generous with their giving toward the cause. Photo by Kat. 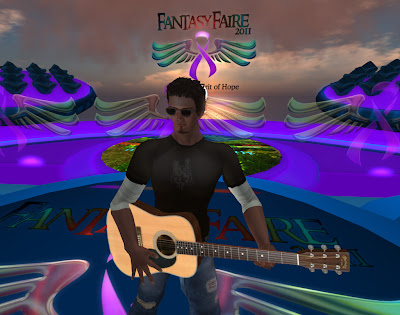 Rocking for the Relayers. Photo by Kat.