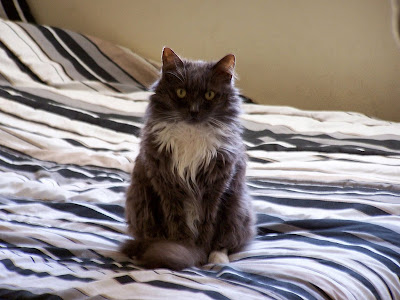 My cat Captain, also known as The Moop (more on that later), succumbed yesterday to a combination of liver disease, kidney disease, and lymphoma. He was 17 years old, and would have turned 18 in May. This is his story.

His full name, which no one ever actually used, was Captain Jean-Luc Picard Of The Federation Starship Enterprise. Most often, he was formally called Captain, though you rarely have to address a cat very formally. Therefore, he was known as Cappy to some, but to me, he was The Moop. The reason I started calling him The Moop will be told shortly.

In The Beginning
In late May 1993, my then-fiancee (and future ex-wife) Anna and I went over to my mother's house one evening for dinner. As we walked in, my mom said in a sharp voice, "Be careful... don't let the cat out." I didn't know that my mom had a cat, but sure enough, a small gray fuzzball soon ambled around the corner. I thought it was a weird-looking kitten, and certainly too young to have been removed from its mother. I asked my mom where it came from and what its name was. She told me that he was called Paris (yech!), and that her friend Vicky had found him in an alley outside her boutique in Long Beach. He had been abandoned by his mother, and was alone near a dumpster. The cat was less than a month old, and was small enough to hold in one hand.

"She does, and she's allergic to them," replied Mom. "So she came by and dropped him off."

"Are you going to keep him?" asked Anna.

"No," said Mom. "I can't have pets in this apartment. I asked around, but no one seems to want him. Do you guys want him?"

At the same time I said "Absolutely not," my ex said "Yes!"

I turned to her. We'd moved into an apartment together in Torrance just a few months earlier, the first place of our own with no roommates. Immediately thereafter, we'd gone to the Carson Animal Shelter and adopted a cat, a solid-black terror we'd named Yoko. But it was a one-bedroom place, a rather small one-bedroom, and the idea of having two cats in there was absurd to me.

"We really can't have another cat. This is silly," I said. At that point, Mom interrupted.

"Well, my landlord will be coming by tomorrow, so I'll have to drop him off at the shelter in the morning, I guess." I shot her an evil look, but I knew I was doomed at that point. We drove home with the cat later that night.

One Weird Cat
We were pretty bad Star Trek geeks at that point... not the original Kirk/Spock version, but the new Next Generation show. Neither Anna nor I liked the name Paris, but I didn't have any suggestions for an alternative (I was still convinced it was ridiculous that the cat was somehow mine at that point). So, later that night as we watched the Enterprise-D flying its way through an episode in its sixth season, she said that she wanted to name the cat Captain Jean-Luc Picard Of the Federation Starship Enterprise. I said I'd sooner die than call an animal Jean-Luc, but I'd be okay with Captain. So it stuck.

Captain and Yoko couldn't be more dissimilar. Yoko was gregarious and demanded constant attention; Captain kept to himself almost all of the time, often spending entire days huddled beneath the bed, and only coming out to eat or use the litterbox. He was skittish around anyone he didn't know, and would sprint from the room if the door opened. Captain wasn't very coordinated compared to most felines I'd known. He wasn't what I'd call a normal cat in any aspect.

Enter The Moop
We lived in that little place with Captain and Yoko for another two years, and in summer 1995, moved to my current place in Redondo Beach. Captain's overall demeanor reminded me of the Winnie the Pooh character Eeyore; he seemed to mope around wherever he went, and the only times I ever saw him being active was when he'd eat or when he'd poop. Between the moping and pooping, I started calling him The Moop, and it become my private name for him.

In 1997, we were joined by yet a third cat, a neighborhood stray we named Scully (being, by then, into the X-Files). In a much more spacious three-bedroom place, it wasn't nearly as much of an issue to handle the multitude of gatos, so with Scully, Captain had yet another kitty friend with whom he would choose to not socialize.

My son was born in 1999, and the cats took a big backseat in the attention department. As the kid grew into a toddler (toddlers and cats not always being the best mix), Captain withdrew even further, staying under the boxspring in the bedroom to avoid having his tail yanked or being chased through the halls. Mostly I'd see him as a lump protruding from under the bed. He did this for months at a time. Did I mention he was a weird cat?

The Lone Kitty
My relationship with Moop ended up lasting longer than the marriage to my wife. She and I started having problems around 2001 (that probably went back much further, but that's another story), and by late 2003 we'd completely split up. In August 2004, Yoko (who was about 13) passed away rather suddenly, and about a year later, Scully, who'd been spending more and more time as an outdoor cat, vanished without a trace. We're fairly sure that she found another home in a similar way as she'd found ours, and there she stayed. It wasn't easy for any of those cats to have my young son trying to treat them like stuffed animals, as kids do, so I didn't blame her that much.

But Captain hung in there -- mostly by doing what he'd always done, which was to keep to himself. But after awhile, perhaps once he realized he was the only cat in the residence, his personality changed surprisingly. He started hanging out in the living room, even when people were around. He and my son, who was now older and more mature, became very close. The boy would be camped out near the TV, playing his video games, and Captain would usually be right next to him.

In 2009, Captain went in for a vet appointment, and during a routine "senior exam" (he was, by then, over 16 -- about 85 in human years), they found clear indications of kidney disease. They said that it would likely kill him in the next few months, but he seemed to be doing fine. He definitely had slowed down at that point, which was a very subtle change for a cat as inactive as he'd been his whole life. In any case, he kept on keeping on for another two years, which was all I could have asked of him.

The End of the Road
A few weeks ago, Captain started changing rapidly. The first big sign was that he was eating less and less. He began to get skinnier, and I knew that he didn't have long to go. After awhile, it became obvious that he was in bad shape, and another series of vet appointments showed that while his kidneys had been well managed, his liver was terribly diseased, and that he'd also developed lymphoma, a cancer of the immune system. Finally, we weren't able to watch him suffering any more, so on March 30, he went into the vet one last time. He didn't return.

Of all the animals I ever had, I'd have never expected Captain to be the one to live to be the equivalent of a human centenarian. He never seemed extremely strong, and as I said... he was anything but normal in terms of his behavior. But for having gone from an abandoned kitten in a Long Beach alley to being a beloved family pet for almost 18 years, he lived a great life. While I personally approach death as a natural segment of the life cycle, I would be lying if I said I wouldn't miss my silly Moop (or, as I'd call him occasionally, Moopy, Moopy-Doo, Mooper, Moops, Moopinator, and so on). He brought a lot of joy to me and my son, and others around him over the course of his long life. 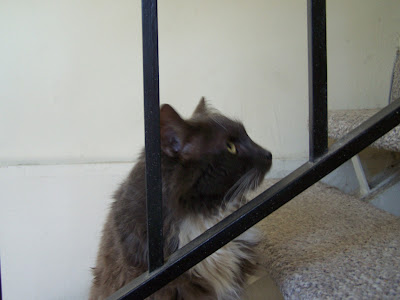 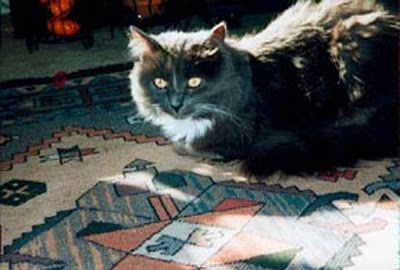 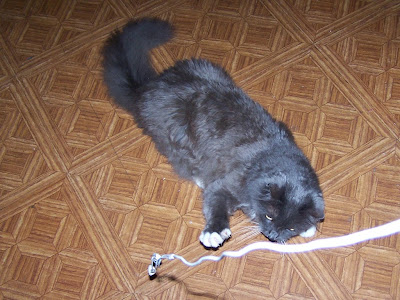 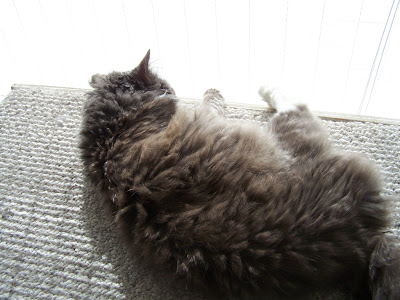 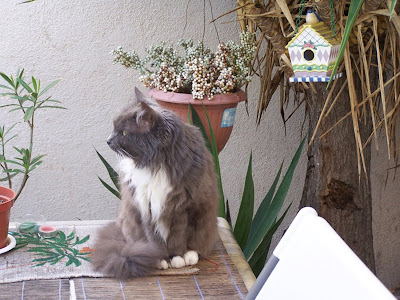 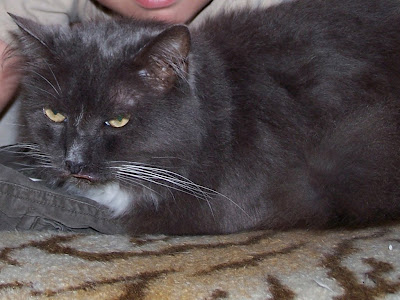 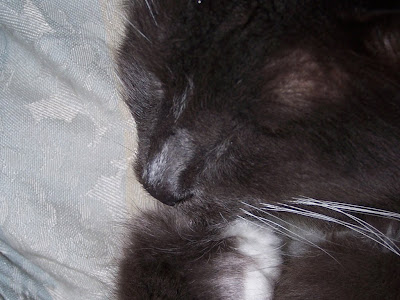 Zak thank you for sharing the story of Captain. It's a fitting memorial.

Thanks for reading, Eli. Captain was uniquely cool... it seemed fitting to memorialize him this way.