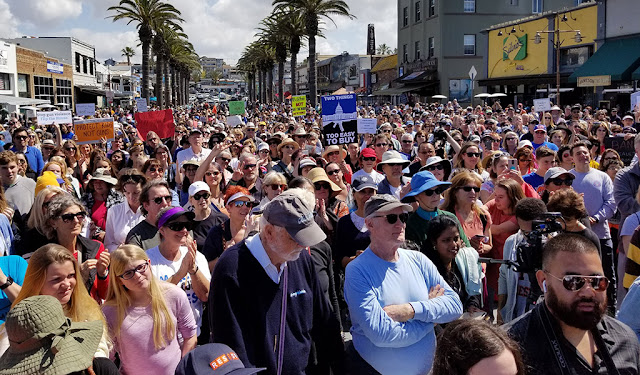 The crowd at Hermosa Pier plaza. Photo by Congressman Ted Lieu.
I'm not going to spend a bunch of time quoting statistics and offering ideas about gun control in this post -- there are many, many places you can get that info -- but I will tell you about my personal experience participating in the "March For Our Lives" on Saturday, March 24. It was an inspiring and meaningful event, not only for me but presumably for the hundreds of thousands of people across the country and around the world who also got involved, so I wanted to document the day through my own eyes.

Good Morning
The march was scheduled to start at 10am, and here in the beach cities, parking on a Saturday morning -- any Saturday morning throughout the year -- is a pain in the ass. Plus, our march was planned to start at the Manhattan Beach pier and end at the Hermosa Beach pier, about two miles south. Even if we'd driven, we would have had to get back to our car afterwards. It made more sense to hop in an Uber and get dropped off at the starting location. I was accompanied by my lady Kat and my son Nicholas, who is 18 years old and very much a part of the generation of young people who inspired this social activism. Nick and Kat and I all have similar feelings about the cause; none of us are opposed to gun ownership. We support the Second Amendment. But we do feel that unfettered access to guns, with no background checks or training required to own and use one, has a terrible effect on the world. Also, the types of weapons that the public is currently allowed to have -- notably, semi-automatic rifles with the ability to use high-capacity magazines -- are not those that are used purely for hunting, sport, and self-defense. They are weapons of war that serve no purpose in the hands of private citizens other than killing other people.

Enough on that. We got up about 7am, and make sure we had some water and snacks for the march. The weather was perfect... sunny with scattered clouds in the mid-50s. What we neglected to do -- which was amazingly dumb, considering we all know better -- was to use any sunscreen. All three of us have red, sunburned faces and raccoon eyes today as a result of where our sunglasses stopped the UV hitting our faces.

Getting Started
Our Uber driver arrived on schedule; it only takes about ten minutes to get to Manhattan Beach pier from our home in Redondo. I had no idea what to expect in terms of turnout, but the moment we pulled up and got dropped off, there was a certain electricity in the air. The very first person I noticed as I got out of the car was a guy pushing a two-kid stroller. He had on a "March For Our Lives" shirt, and both of his toddlers had pink t-shirts that read "#enough".

Kat and I had discussed what we thought the turnout might be, but it was impossible to estimate. I had noted that on Facebook, a few hundred people had listed themselves as going to the event. I was optimistically thinking that as many as 400-500 people might be there. Maybe even a thousand. Imagine my complete bewilderment when more than 5,000 people began to congregate there at the MB pier. This was going to be way bigger than I'd assumed. 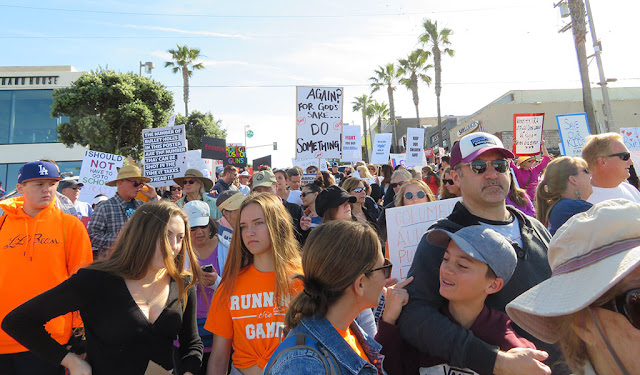 Getting ready to march at Manhattan Beach pier. Photo by Kat. 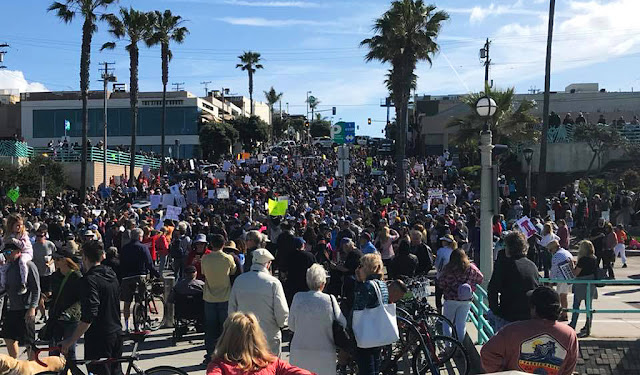 The crowd was so big that they had to delay the start of the rally in Hermosa Beach, since the first marchers arrived there before the last of them had even left Manhattan Beach. Photographer unknown.
Right at 10am, one of the organizers got on a bullhorn and gave a little chat in regard to ensuring a successful event... little tips like not blocking the entire strand, not engaging any counter-protesters, and that since we were in public, we'd be in photos and videos. And then, it started. At first it was hard to move, with a ton of people crammed into the little area at the start of the strand, but once it got rolling, people spread out a bit and it was easy to walk at a brisk but manageable pace.

Not a Stroll
As things got going, a few people started some chants, but it quieted down as people were figuring out where they were going and what they were doing there. Fortunately, some woman who I've mentally called the Protest Drill Sergeant started screaming at us from a railing above the strand. "Start making some noise! This is a protest, not a stroll!" We laughed, but she was right. From then on, for much of the distance between the two piers, you'd almost constantly hear groups of people shouting in unison...

"No more silence, stop the violence!" 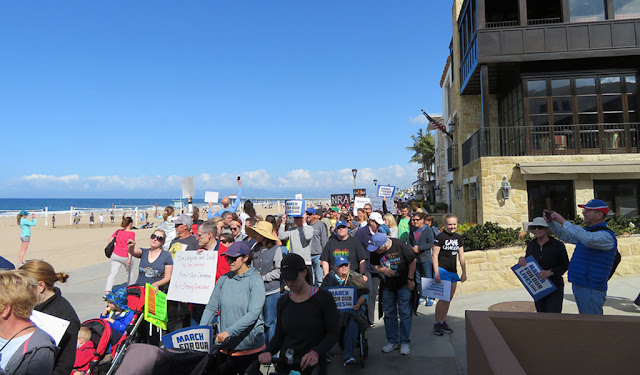 The mood of the marchers was vibrant and upbeat, and the weather that day was absolutely perfect. Photo by Kat.
Going the Distance
I've walked between the MB and HB piers on several occasions. It's about two miles, and it's obviously beautiful being there right on the ocean, enjoying the fresh air and the attractive and athletic people who live in our community. I've never before, though, done it while shouting and holding a sign above my head for much of the trip. I'll just say that it's a good thing I exercise every morning, because I was definitely feeling the burn by the time we arrived at the Hermosa pier some 40 minutes later.

One thing that I hadn't thought would be a topic of conversation was my own t-shirt. It simply says, "It's Mueller Time!" in a similar script to the famous Miller beer slogan. I thought this was a well-known meme among the Resistance movement, but apparently it wasn't to most of the marchers there. Before, during, and after the march, I got a lot of laughs, handshakes, and people wanting pictures, which was fun.

I can also tell you that the vibe of the crowd was extraordinarily positive. Everywhere I looked, I was seeing smilies, animated discussions, and an optimistic crowd that seemed completely focused on the task at hand. As we wrapped up the last few steps to Hermosa pier, I saw that there was a small stage area set up in the plaza, so Kat, Nick and I found a spot not far from the stage. 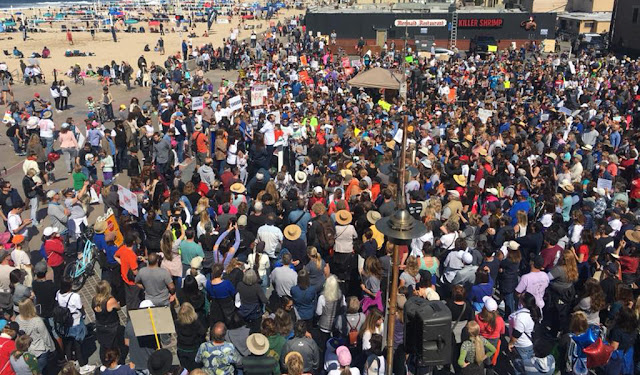 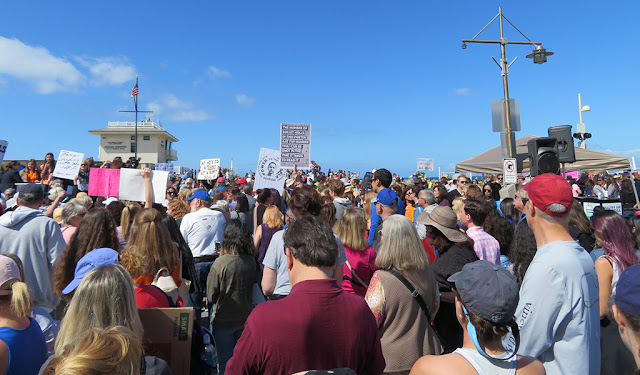 What an amazing turnout! Photo by Kat.
Rally Time
I knew there'd be some speeches after the march. I'm not very good at listening to most speeches; I find them to be dull and self-serving. However, on this day, I was captivated by each and every person who took the mic. It started with a couple of local leaders: Manhattan Beach mayor Amy Howorth and Hermosa Beach mayor pro tem Stacey Armato. State senator Ben Allen spoke about the NRA being a "paper tiger", which is something that all people need to understand.

Then, a series of local school students that ranged from 8th graders to high school seniors, spoke passionately. The fact that this entire movement is being spearheaded by young people -- many of whom will be eligible to vote in the upcoming midterm elections and/or the 2020 presidential election -- fills me with hope for the future. There were heartbreaking speeches by people who had lost loved ones to gun violence at Newtown and in Las Vegas. A local teacher, one whom my son had at Redondo Union High School, gave a speech that pointed out the insanity of expecting teachers to be armed. Finally, Congressman Ted Lieu and Assemblyman Al Muratsuchi addressed the crowd. 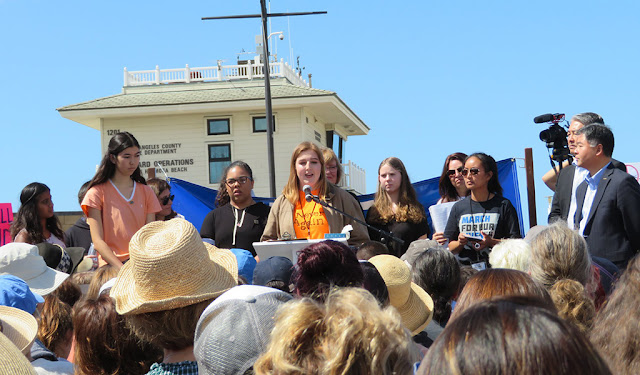 A student addresses the crowd at the rally. Photo by Kat. 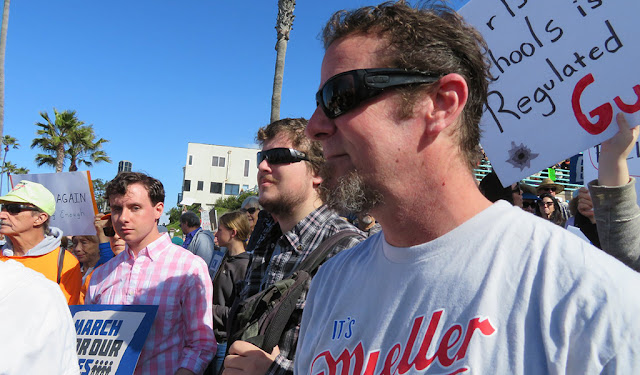 Me (in my "Mueller Time" shirt) and my son. Photo by Kat. 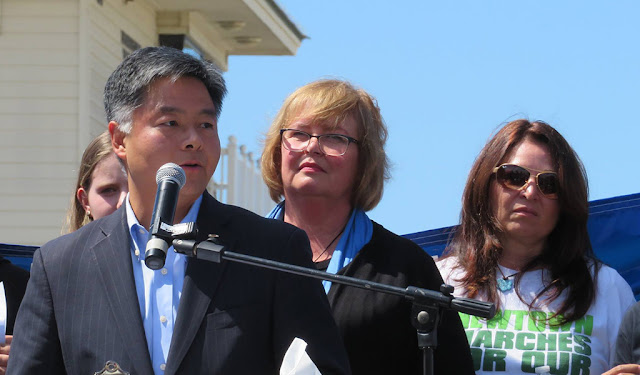 Congressman Ted Lieu. Photo by Kat.
By the time the rally ended, we were definitely ready to sit, relax, and replenish some of the calories we'd expended that morning. We grabbed another Uber and made the very short trip home. It's safe to say that we were tired and more than a little sore from the walking and standing, but all three of us were very glad we'd been a part of this social activism. The next steps are pretty clear: we're going to take steps to ensure that no political leader who is in good standing with the NRA gets elected, or re-elected. But that's another topic for another day.

Only the Beginning
I do want to give credit and thanks to a lady named Liza Caso and her recently-formed organization, the South Bay Coalition for a Safer Tomorrow. It was through her efforts that the South Bay march happened, and I plan on being a regular participant in future actions of the group. While we'd all like to make a difference on a global/national scale, the most important efforts are often those focused in your local area, and it's great knowing how many like-minded people there are in my beloved South Bay who agree that gun control is as important an issue as any. I applaud the efforts of everyone who made Saturday's March For Our Lives happen, from the student leaders from Parkland, FL to every person here in our area. Thank you! And, as I've said before, this is only the beginning. 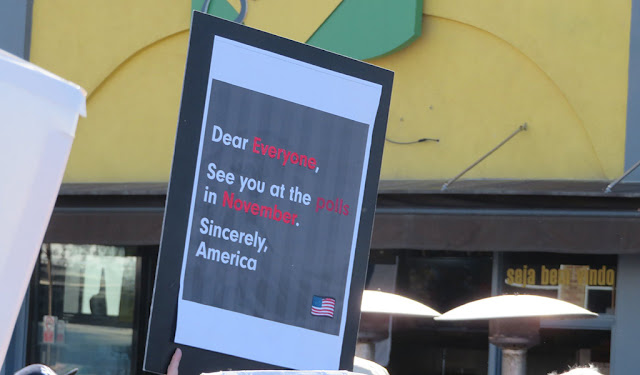 You'd better believe this is true. Photo by Kat.
Posted by Zak Claxton at 9:25 AM