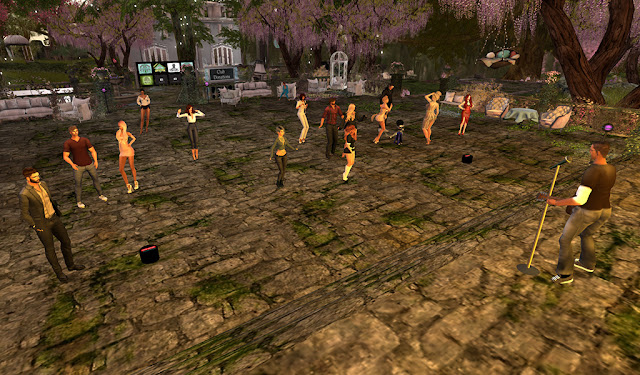 Another great night at Serenity Gardens. Photo by Kat.
The music has been flowing in a big way here in Zakland. I'll tell you about last night's show at Serenity Gardens in a moment, but first I want to make the first official mention of an upcoming new song and a new collaboration between myself and a terrific Second Life musical artist whom I've long respected.

Introducing Claxton & Larson
It was a number of years ago that I was at an SL music event and heard a performer that blew me away. Much like real life, the really impressive talents in SL do stand out among the rest. His name in Second Life, I found out, was Mulder Watts, but he performed and recorded under his given name of Jon Larson. I could tell by listening to Jon's music that we shared many of the same influences, and he was performing original songs that were very impressive. He often did dual-streaming SL shows with Voodoo Shilton, another really outstanding guitarist. I made a mental note at the time that I'd definitely take advantage of any opportunity to do something musical with this guy.

Fast forward to fall 2016, when Kat and I attended the Twin Cities Jam in Minneapolis. We met Jon and his lovely wife Alecia there, but it was only in brief. The larger SL Jams can be hectic, and you never seem to be able to spend enough time with any given person. Jon and I spoke afterwards and said that next time we were in the same place at the same time, we'd be sure to do some tunes together. That opportunity came along in February, when we both went to Arizona for a mini-Jam. While we were just relaxing one evening, Jon and I had our guitars out and the idea came up of quickly trying to write an original song. Sometimes those things actually work; sometimes they don't. But in the space of a few minutes, Jon and I managed to put together a little chord progression that included a verse, chorus, and bridge. It wasn't anything spectacular, but I thought it sounded pretty good. After we returned to our respective homes (Jon lives in Northern California, while I'm about 400 miles south of him here in the LA area), I spent some time on a weekend fleshing out the song with some added instrumentation, and showed Jon the results. He then came up with a melody and we started building the song together, going back and forth by sending audio files to each other as we got inspired and recorded new parts. 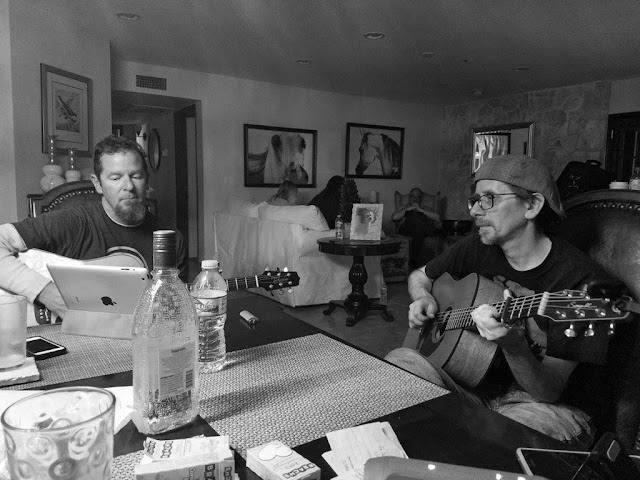 Jon and I in Arizona, just starting to create the song we're going to be releasing soon. Photo by Alecia Larson.
The real turning point happened when Jon told me his idea for a lyrical theme. He and I seem to share outlooks on social and political issues, and Jon asked if I'd be okay with the song being about the madness of gun violence and school shootings. I replied that I'd be 100% behind any message he wanted to offer in that regard. It just so happened that the horrifying mass shooting at Stoneman Douglas High School in Florida had occurred the day before our Arizona trip, so the subject was certainly fresh in both of our minds. On Saturday of this past weekend, Jon delivered the first pass of his vocals with the lyrics, and I added a harmony part. Our voices complement each other very nicely, it turns out, and the song is becoming more impressive with each refinement.

We've decided to release the song to the public when it's complete. Additionally, Jon suggested, and I heartily agreed, that it would be the right thing to donate any proceeds from sales of the song to a cause that is focused on eliminating gun violence and school shootings. More information will be coming soon on this exciting news, but I can tell you the name of the song and show you the artwork we developed for its release. 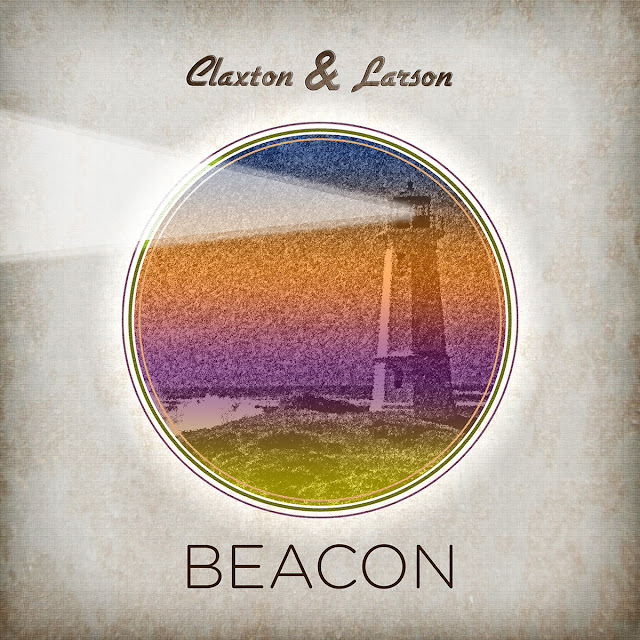 Coming soon: "Beacon" by Claxton & Larson.
And Now, The Show
As you may recall from a couple of weeks ago, my last show in SL didn't go so swimmingly due to Second Life being in the midst of a massive DDoS attack. I'm happy to say that everything was back to its usual stable self in SL for my show last night at Serenity Gardens. We had a nice crowd, and as I've been prone to do recently, I made sure to include a couple of songs I'd never done previously. Both went really well. 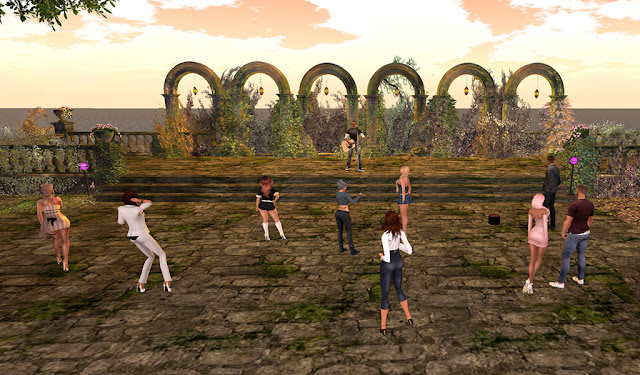 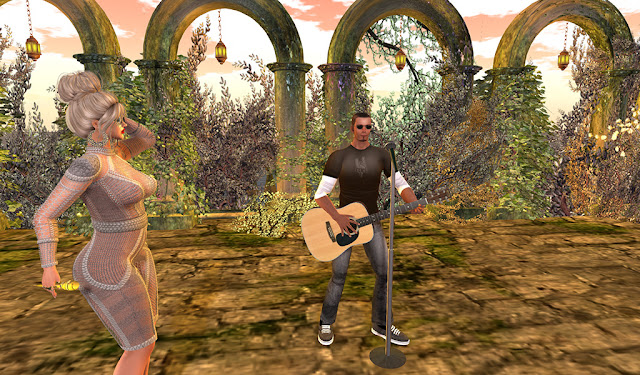 I was happy to see Mavenn having the slot to perform after me at Serenity. She's a cool lady with a killer voice. Photo by Kat.
Serenity Gardens set list...
Take Me With U (Prince)
1979 (Smashing Pumpkins)
*Baker Street (Gerry Rafferty)
Woodstock (Crosby, Stills, Nash and Young)
What I Got (Sublime)
The Needle and the Damage Done (Neil Young)
*You Make Loving Fun (Fleetwood Mac)
Sour Girl (Stone Temple Pilots)
Vendetta (They Stole My Crayon)
Swing Lo Magellan (Dirty Projectors)
So. Central Rain (R.E.M.)
Ashes to Ashes (David Bowie)
Always Tomorrow (Zak Claxton)

Huge thanks to everyone who came out to the show, with special super thanks to the following who helped support it!
Aurelie Chenaux, Tyche Szondi, fabilene Cortes, taryn Adasia, RansomTalmidge Resident, TheaDee Resident, Kat Claxton, my manager Maali Beck, and the great team at Serenity Gardens, Tilly Rose and Ilsa Wilde.
Posted by Zak Claxton at 10:22 AM