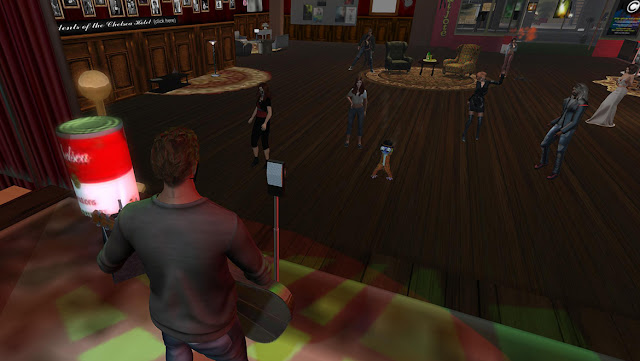 Back to the jams with another fun Tuesday night show at Hotel Chelsea. Photo by Kat.

After dealing with the audio issues I'd had while attempting to perform on Sunday, the only criteria I truly cared about for my show at Hotel Chelsea in Second Life was that I was able to actually do said show. And, not leaving things to chance, I'd already tested out my stream previous to the show. Storytelling hour was nice for one event, but I didn't want to make it a regular thing.

Therefore, I was glad at the moment that my audience at the show let me know they could hear me just fine, and that I didn't sound like R2D2 trying to cover Kraftwerk. If I'd been able to perform as planned on Sunday for Feed-a-Smile, I'd have had an entirely different set list at Chelsea... but as it was, I'd enjoyed curating and preparing those songs, and I just ended up using the same set on Tuesday night that I'd planned to do Sunday but couldn't. All good.

Vaccines and Stuff
Before I go into more details about the show, I want to mention the current state of things in regard to the ongoing battle against COVID-19.

Saturday Night Live, in its usual excellent way of lampooning life as we know it, did a great cold open this past weekend in regard to the rather confusing nature of the vaccination plan. The first thing to note is that while there are similarities across the country, the qualifications to get the vaccine varies from state to state, and county to county. I happen to live in the most populous area in the entire United States here in Los Angeles County, so it's understandable why here in particular, the challenges of getting all of us vaccinated are among the most difficult.

The good news, as far as I can tell, is that per yesterday's announcement, it's expected that by the end of May, enough COVID-19 vaccine doses will have been produced to cover everyone in the USA. Keep in mind that this is just the first step; the vaccines still need to be administered. Therein lies the current confusion. I think the plan of vaccinating the most vulnerable people first makes the most sense, which is why many people over age 65 -- like my mom, for example -- have already receive one or both doses of the vaccine. They've also been prioritizing vaccinations for health care workers and other people who work in critical jobs that force them to interact with the public on a regular basis, and for people who have preexisting conditions that would result in a higher likelihood of death should they contract the virus. Again, I completely support and agree with this. 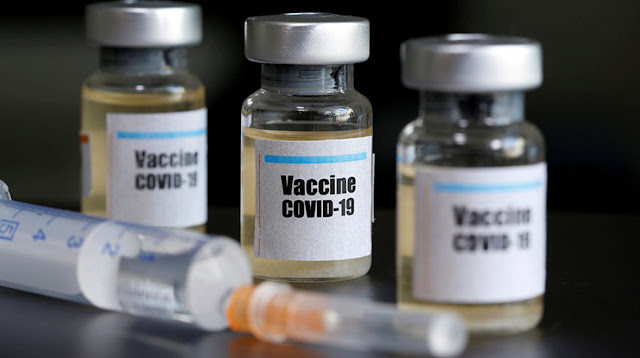 We now have approved, highly-effective vaccines from a variety of pharmaceutical manufacturers including Moderna, Pfizer, and Johnson & Johnson. Now it's just a matter of getting them into the people.

But What About Me?
Once you get past those groups, it's a total mystery as to how this vaccination plan works. Initially, I'd seen information that the next group up would be mine: people aged 50-65 who aren't otherwise at high risk. But then, when I went back to the official web site for the LA County Department of Public Health to see if there were any updates, the only eligible groups listed were this mentioned above, aka Phase 1A and 1B.

Let's state the obvious: it's human nature to be self-centered. I'll give you an example. My last vacation of any kind was in May 2019. That's going on two years with very little time off work and almost no change of scenery. I was sort of hoping that if I could get fully vaccinated (i.e., having received both shots and taken time to ensure that I was experiencing no side effects) that in early June, I could head out to Joshua Tree for a few days of rest and relaxation. That might still be the case, and I'm hoping it is. But I'm not counting on it. 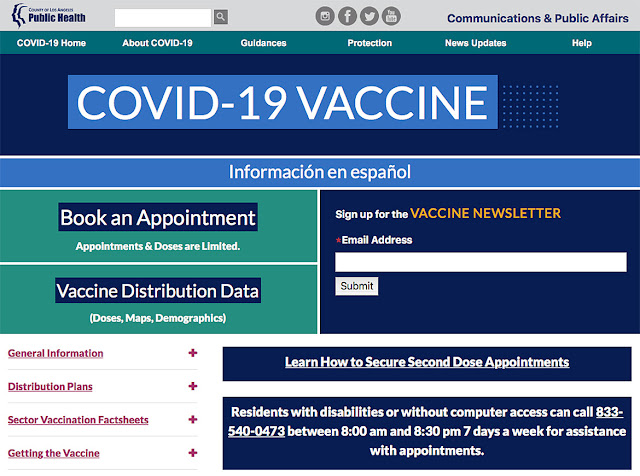 LA County's public health site is as informative as it can be under a changing set of circumstances. Unfortunately, it still doesn't tell me when I might expect to be eligible to receive the vaccine, and it might be awhile.

I could be resentful about this, but what good what that do? The fact is, the way the authorities are prioritizing the vaccine distribution does make sense. Also, the more people from any group who get the vaccine, the less likely that the virus gets passed along to me and people in my circle of family and friends. But this, too, offers a mindset that presents a problem, which is the ability of people to understand how this all works.

So, All Is Well and No More Masks, Right?
No, just because people have started being vaccinated does not mean the virus is defeated and people can go mask-free. Illustrating this point, the actions this week from Texas governor Greg Abbott were dangerously irresponsible when he declared his state to be 100% open with all mask mandates dropped beginning March 10. Here's why.

For one thing, there's a lot we don't know. How well will the current vaccine hold up against mutations of the coronavirus, both current and future? Will people who have been vaccinated still be able to carry COVID-19 and be able to inadvertently pass it along to unsuspecting people? We actually know the answer to this one, and it's a big "yes". And per above, with the grand majority of people yet to receive the vaccine, what happens when there are huge gatherings of people for events like Easter and Spring Break and so on?

Here's the deal: even after you are vaccinated, you should continue wearing a mask. If you go into a place of business or some kind of event where mask use is not being enforced, leave immediately and do not patronize those places. If people would do these simple things for awhile longer, we can get to a point where true herd immunity is achieved and mask wearing will no longer be necessary. I look forward to that day, as do most people. But it's not here yet, and we have a ways to go before it arrives. 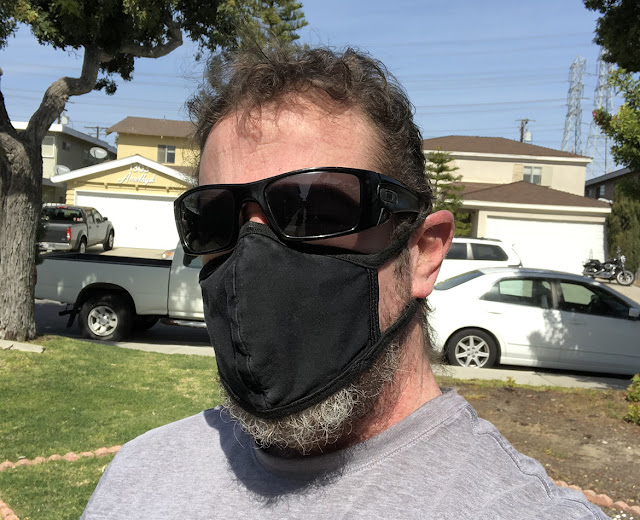 Me, this week. Even a brief trip out in public means that I swear a mask like any sane and responsible person.

Back to the Show
Anyway, it felt good to do a regular old Zak Show in SL. I realize that doing one show per month isn't enough; not for me or for my friends/fans who enjoy my live performances. At some point soon here, I'm going to start up some regularly scheduled alternate shows, but I have yet to decide whether they'll be in Second Life or if I'll get back to doing the video-based remote shows that I've done previously on a number of online and social media platforms. 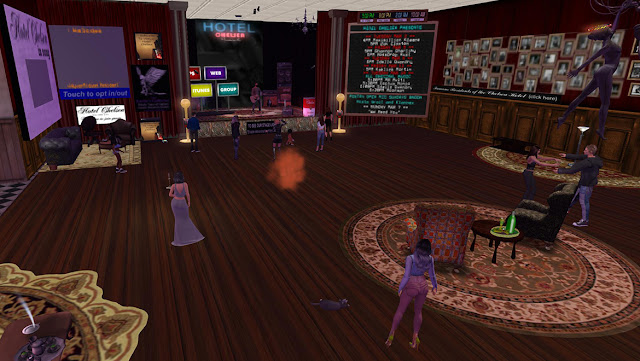 Getting rolling onstage at Hotel Chelsea as people arrive. Photo by Kat. 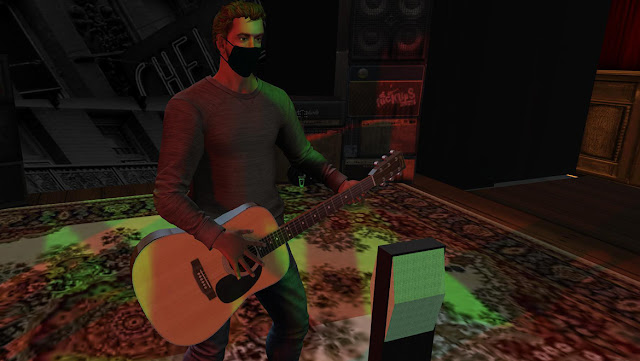 Masked in reality, masked in the virtual world. Photo by Kat. 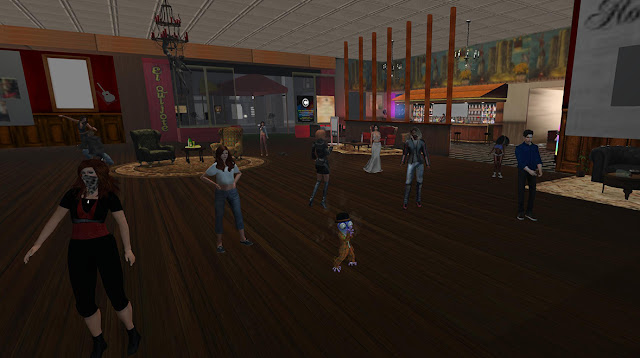 People having fun at Hotel Chelsea. Photo by Kat.

Regardless, we had a small but engaged crowd who seemed to enjoy the songs I was doing, and that's really all I ask for from an SL show. My voice and guitar playing held up well, and I was feeling good throughout the show.

Big thanks to all who came out to the Zak Show, with special extra thanks to the following who helped support it!