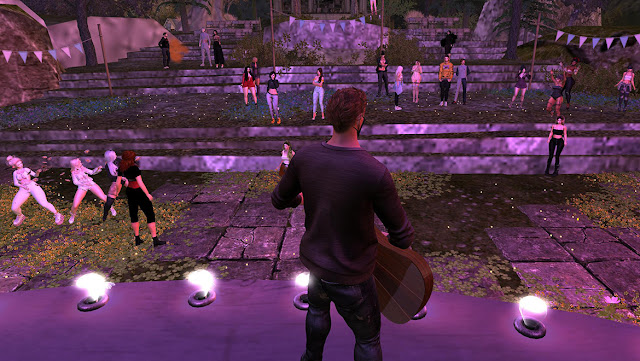 I can subdivide the kinds of charitable benefit shows I've done into three basic categories. One is for large organizations like Relay for Life, where the money goes to a fund and is then parceled out to people in need, but also to fund research and so on. The second kind is for smaller groups, like the shows I do for Feed-a-Smile that benefit the children of a single school in Kenya who use the funds for meals and to improve the infrastructure of their educational environment.

The third kind of benefit I've done over the years, and thankfully there have been few of them, is focused on a single individual -- usually someone I know personally and often a good friend -- who is in dire need for help. And not to go into an editorial tangent, but every one of these cases has been a fellow American person who has run into a health emergency that is sending them into financial straits. It goes without saying that in almost all other developed countries, their citizens would never run into the possibility of bankruptcy the first time they have a serious medical situation, but it happens here all the time.

It's a terrible truth and I hope it changes sometime within my life with possible programs like Medicare for All, where health care is considered a human right. But for now, we're stuck with the system we have, and unfortunately my friend Brenda Hayes, known to many in Second Life as Bee Blackrain, recently found herself facing a pile of medical bills. It's the kind of thing where, when you're already fighting to recover from an illness or injury and still having to pay your rent and utilities and other bills, can send your entire life into a tailspin. 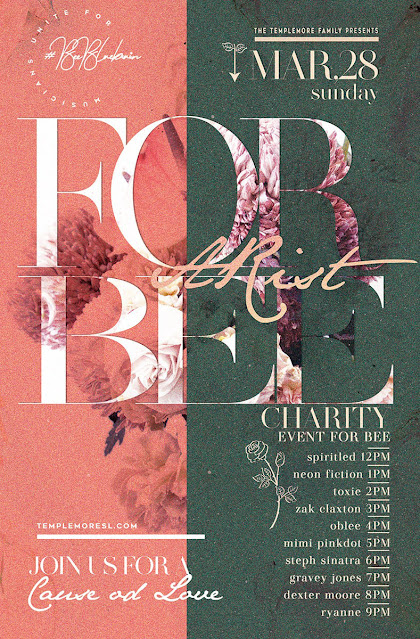 The promo poster for the benefit show.

Let's Talk About Bee, Baby
I'm pretty sure that I first became acquainted with Bee via her role as the longtime hostess at Templemore, one of Second Life's absolute finest music venues and virtual environments. Nothing against other venue hosts... most of them do a fine job of greeting people and making them feel welcome, and encouraging tips to the venue and the performer. But right from the start, I noticed that Bee had a quality which put her in a class by herself, as far as I was concerned: she had an extraordinary knowledge of music. For example, I'd choose to cover a relatively obscure indie band, assuming no one would be aware of them, but Bee would not only chime in about how she loved the band and mention other songs they'd done, but would even mention related bands I should check out. I didn't just interact with Bee at Templemore; she'd also often show up at other venues where I'd perform, and it was always a delight to have her in my crowd.

As I've said before, I have nothing against pop music, but I usually don't expect that others will share my enthusiasm about underground bands and artists. Bee's love of music didn't seem tied to any specific genre; she'd be able to discuss everything from indie rock to EDM to hip hop with equal awareness. Adding to my simpatico toward Bee, she and I are about the same age, so we've gone through the same set of cultural influences... but unlike many others our age, she didn't stop enjoying new music that came out after her youthful years. You'd be surprised how rare that is. 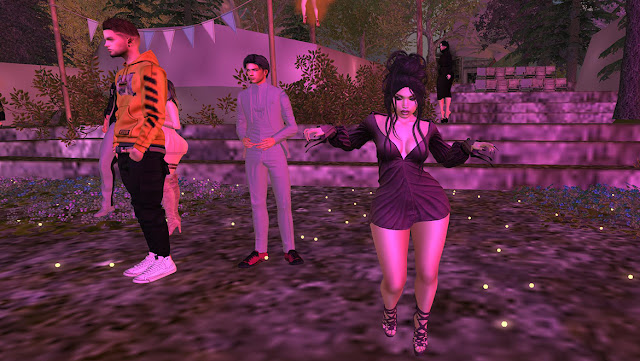 Lovely Bee Blackrain dances near Luis and other Templemore people. Photo by Kat.

I'd seen Bee's Facebook post a few weeks ago about a scary health incident that happened to her while at work, and I found it highly troubling. When our mutual friend Luis Lockjaw (Templemore's amazing design guru) got in touch with me to let me know he was putting together a special surprise benefit show for her, I couldn't say yes fast enough. I can tell that Bee is like me in another way; we are both strong people and neither of us want to be viewed as any kind of victim, and prefer to lead lives of independence where we don't have to rely on others. That's why Luis set up this event without informing her.

Silliness That Happened (And Didn't)
Even though I am way overdue for a new computer, most of the time in SL I have no problem cruising around and doing simple things like getting my virtual ass on a stage. However, Templemore, in its lush design with all kinds of textures and particles and tendency to have large crowds, often turns my computer into a mostly useless laggy lump. This became apparent while I was about to start my show. Toxie Darkmatter was wrapping up her set at Templemore's new amphitheater stage, and I had positioned myself onstage, slightly off to the side.

Well, apparently, as I was starting my show, I hit the up arrow one too many times and propelled myself off the stage, landing directly in front, and of course it was at that moment that everything locked up and I couldn't move at all. I was already on the audio stream and told the audience that I'd just do the show from where I was standing.

That didn't sit at all well with Luis. As I played my first tune, I saw a large basic wooden prim appear beneath me, and then it lifted me up to stage level. Then, another prim appeared in front of me and literally bulldozed my avatar backwards until I was standing exactly where I'd wanted to be positioned. That's fucking genius. I'll tell you that after more than 14 years doing live music in Second Life, it's the first time I've been physically shoved into the spotlight, and I loved it. 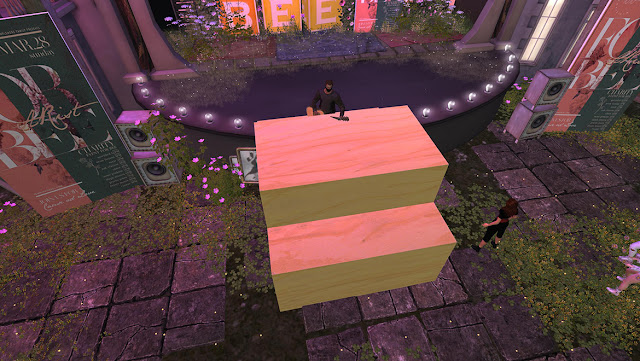 Luis uses basic prim blocks to physically push me onto the stage where I belonged. Photo by Kat.

You said it yourself, you like it like I do
Put your lips on my dick, and suck my asshole too

However, that didn't stop me from doing "Jesus Ranch" by Tenacious D, though I did feel compelled to give a big preamble warning about language before launching into the raunchy song.

Lots of New Tunes
I'd honestly already been planning on breaking out some previously unperformed songs at an upcoming show, and it worked out perfectly so that I could do those in front of Bee and an appreciative audience at Templemore. You can take a look at my full set list below, but this may have been the first time I've ever done six songs -- half of my set -- that I'd never performed before.

Two of them were added at the last moment. The first is a song that I literally wrote and recorded the day before the show (I'll be posting about that writing/recording session shortly) called "This Time". The other was one of my improvised songs I sometimes do at the end of a set when I've got a minute or two to fill before the next artist takes the stage (which was Oblee in this case). It's not easy to literally play and sing things that you're making up on the spot, and I may have gone slightly overboard with my lyrics on "Doin' It for the Bee". 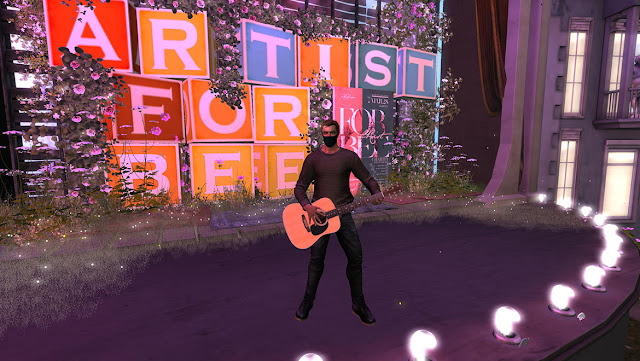 Am I still wearing my mask in SL? Hell yes I am. Until I stop wearing one in real life, it stays on in SL. Photo by Kat. 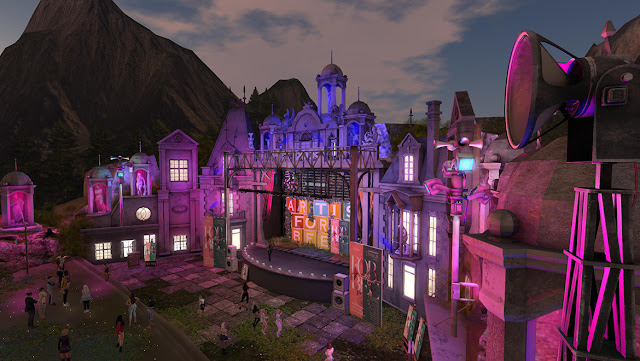 This was my first show at the outdoor Templemore Amphitheater, which is every bit as amazing as the other many stages that rumble at Templemore. There's nothing else like it in SL. Photo by Kat.

Regardless, the day itself was super fun -- it went for ten straight hours with a bunch of excellent SL performers -- and I know that a ton of cash was raised for Bee, which was the intent of the whole thing. I am confident that this will be helpful for Bee, and perhaps will ease some of the financial pressure she faces while making a full recovery, as she will.

Big thanks to everyone who came out for my show, to all of the artists and Templemore staff who made the event happen, and most of all to Bee for being such a lovely person in every way!