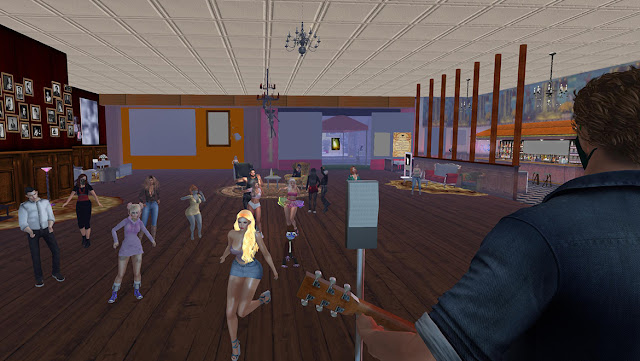 Rocking Hotel Chelsea on a Tuesday night. Photo by Kat.

It's an exciting time for me right now, and probably for many people, but let's talk about me. I had an excellent show last night at Hotel Chelsea in Second Life, I am about to embark on my first vacation in over two years, and my band They Stole My Crayon released a single this week... our first new music that's been put out since our album debuted in 2016. Whew! That's a lot of cool stuff. Let's start at the end and work our way back.

New Crayon Tune
Here's the deal with this. Like many bands, when we were deciding what to include on the debut album for They Stole My Crayon, we'd written more songs than we were going to include on the album. In fact, we briefly considered having our debut be a "double album", which was more of a thing in the days when music had to be on a tangible physical piece of media. But back to the point: we'd written way more songs than the 12 that ended up on the album. Some of those songs never even made it to the stage of creating a demo; others got to the demo stage but then languished. And at least three of those songs were practically finished and were serious contenders for inclusion on the album, but just didn't make it over the finish line before we set a release date for the album. This happens a lot, trust me.

After the album was released, it was our initial plan to come out with our second release soon thereafter, but then life happened. Regardless, we continued working on those and other songs that we subsequently wrote. One of those songs was "Box By The Cliff", a tune based on a demo that Bunny had done and that we all loved. We tried it out a couple of different ways in terms of how we treated the vocals and instrumental arrangement, but ultimately wanted to keep the spooky vibe of Bunny's original demo. We ended up having Christina handle the lead vocals on it, with Bunny's ghostly voice echoing her parts. I added some ambient guitar parts and bass, we screwed around with the drums and rhythmic sounds, and... that was it.

Fast forward a couple of years. I'd been itching to release something new from The Crayon... and keep in mind, we've been continuing to work on new tunes that are in various stages of completion. But "Box By The Cliff" felt like it wasn't going to get any cooler by trying to push it beyond its lo-fi state, so we did a once-over on the mix, did a quick master, and bang-zoom... a new single. It's available now on Bandcamp, and in a month you'll be able to hear it via all streaming services (Spotify, iTunes and all the rest).

Heading to the DesertThat's right. After more than two years that, at least for me, included a ton of craziness above and beyond a global pandemic, I'm finally going to take some time off work and get away from these four walls that have been my home and self-imposed prison for far too long. Christina and I are going back to our favorite magical place: Joshua Tree, CA. I'm sure I'll have some stories to share upon my return. 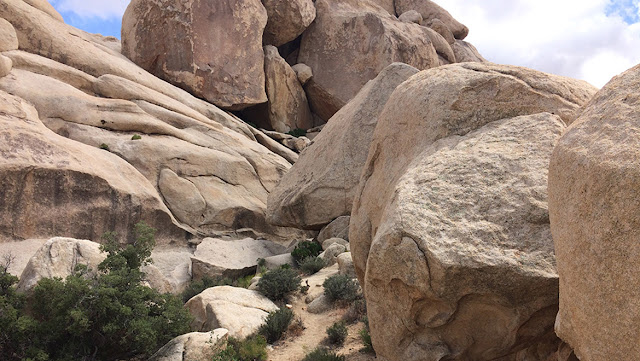 I really miss these rocks. Yes, these specific ones.
How About That Show?
Ah, yes indeed. I was feeling very relaxed while starting my show at Hotel Chelsea on Tuesday night, which is ironic since I'd been immersed in a stressful world from hell in recent weeks. Doing a show was probably just what I needed, now that I think about it. We had a nice crowd, including a good number that hung out after Max Kleene's set before mine.
I was excited to do two songs I hadn't done previously, both of which being brand new releases by indie artists. Cory Hanson's "Bird of Paradise" and Charlie Martin's "Swirl" will both likely become regular additions to my sets, and both debuts went super well. It was a good night and I had good energy. Also, doing a show on June 1 was a good opportunity to acknowledge the start of Pride Month, which I was happy to do during my show. 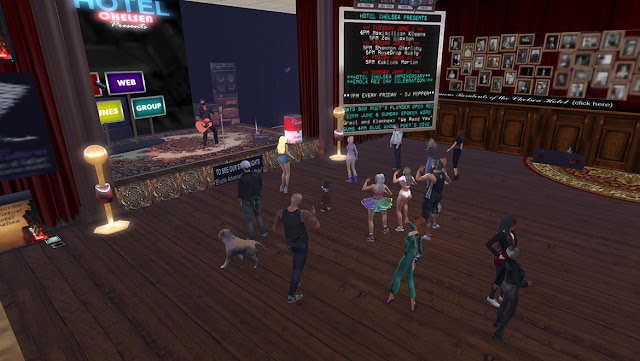 I don't think I've ever had a bad show at Chelsea, and most of them are pretty damn good. Photo by Kat. 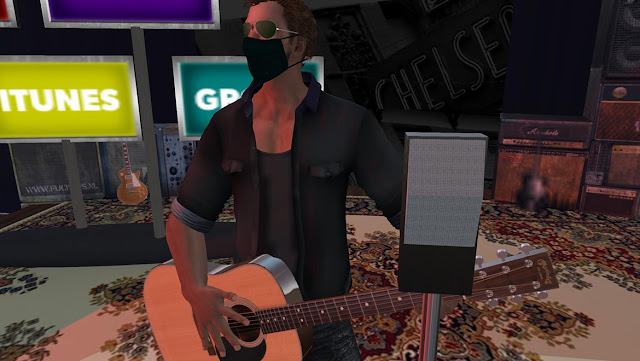 Much like real life, I'm getting closer to the point that I'll remove the mask I'd worn in SL since the start of the pandemic. I'm in no hurry to stop reminding people that masking up and social distancing are still important parts of getting rid of this damn disease. Photo by Kat.
Hotel Chelsea set list...
Heart-Shaped Box (Nirvana)
Northern Sky (Nick Drake)
*Bird of Paradise (Cory Hanson)
Crosses (Jose Gonzales)
Man on the Moon (R.E.M.)
How Soon Is Now? (The Smiths)
Box by the Cliff (They Stole My Crayon)
*Swirl (Charlie Martin)
Bull Black Nova (Wilco)
If I Had a Tail (Queens of the Stone Age)
Here’s Where the Story Ends (The Sundays)
Moonage Daydream (David Bowie)
*Indicates the first time I've performed this song in SL
Huge thanks to everyone who came out to the show, and extra special sauce for the following who helped support it!
Zanne Boucher, Nina Brandenburg, Harley Wytchwood, Gemini Mercury, Maximillion Kleene, Tyche Szondi, Kat Chauveau, LillyAnnSetner Resident, Alex Zelin, Trouble Streeter, Rock Doghouse, Kat Claxton, dstross Resident, my terrific manager Maali Beck, and Hotel Chelsea manager Shyla the Super Gecko!
Posted by Zak Claxton at 9:02 PM