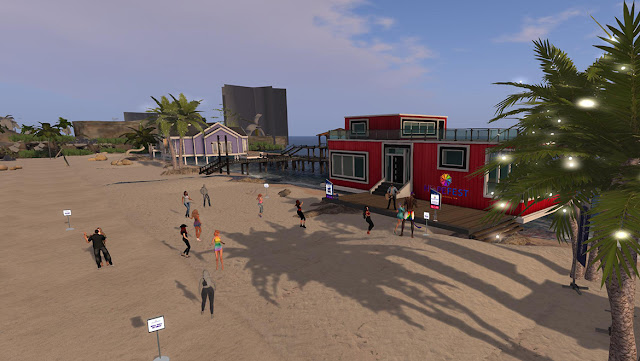 Enjoying a nice afternoon at the beach while raising funds for an important cause. Photo by Kat.

After spending the previous weekend in Joshua Tree and then diving headfirst back into work for a few days, it was a nice break in my midweek doldrums to do a benefit show for Relay for Life at SL HopeFest in Second Life.

I've done dozens of fundraising shows for RFL, going back to when I first started performing in-world in the mid-2000s. As I tend to mention during these shows, the odds are infinitesimally low that you or someone close to you won't be affected by cancer at some point in your life, if they haven't been already. There's never a wrong time to help raise funds for research and treatment. Relay for Life is the official fundraising arm of the American Cancer Society, and Second Life has been involved with RFL from the start, so it's good karma to do what I can and lend support to an inarguably good cause.

Bring Out the People
One thing that I have definitely noticed over many charitable benefit shows in SL... it's hard to get people there, and I think I know why. They assume a few things (and not all are inaccurate in some cases)... that the show will be morbid and serious, that they'll be preached to, and that there's an expectation of a large donation to be part of the event.

I can't speak for other performers (and in fact I refuse to), but at least in my case, I always adopt a vibe of positivity during these benefit shows. Cancer is a serious topic, but the only way to defeat a serious foe is by maintaining a positive and optimistic attitude, and that's what I encourage during my shows.

Another thing to keep in mind, as far as SL shows go: just being there matters. When people look at the map and see a bunch of green dots indicating people congregating in a certain spot, they tend to want to join whatever is going on. Even if you're unable to contribute, your presence will make a difference. Also, I often explain to people at benefit shows that SL's micro-economy means that while the actual amount spent is far less than it seems (my analogy is always to state that L$1000 doesn't even buy you a grande latte at Starbucks), even tiny amounts add up. Don't avoid these shows just because you don't have much to spend. Every little bit counts.

Karma Is Real
I like the thought of doing things selflessly, but most actions (perhaps all) have some element of self-fulfillment. If I feel good about having helped others, that's also an action that helps myself, and there's nothing wrong with that; in fact, that positive emotional feedback is the main reason that causes people to continue being involved in charitable actions. But let's tak about a concept called "karma".

Karma in its literal sense is a term from Hinduism and Buddhism postulating that the sum of a person's actions in this life (and in previous lives) is what determines their fate in future existences. I am neither a Hindu or a Buddhist. In fact, I only believe in one life... the one you're living right now. Nothing that I do is based on any system of belief where the reward or punishment for good or bad behavior happens in any sort of afterlife or reincarnation.

That being said, I've seen the informal results of karma every single day. People who do good things are often those who lead happier and more fulfilling lives. People who immerse themselves in negativity, or whose actions result in harm to others, are often the most miserable. There was something I said during my show for SL HopeFest: by contributing to help find a cure for such a prevalent disease as cancer, you never know if the life that you save might end up being your own. So, we're talking about karma in the sense that John Lennon sang about in "Instant Karma". You might not have to wait for the next life to reap the benefits of your actions, be they good, bad, or otherwise. 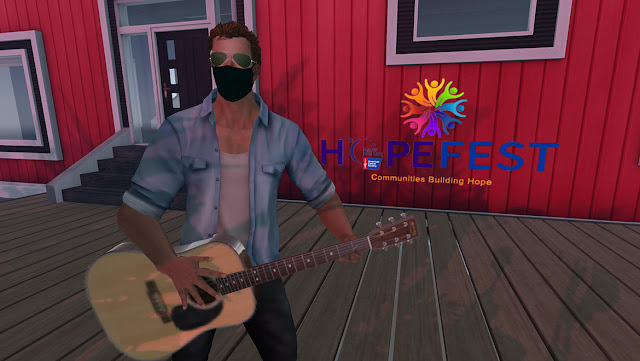 Yup, still wearing my mask. June 15 is the date that most mask mandates are lifted here in California, and yet I am also reminded that my audience in SL is global, and many places are far removed from the improvement we've seen here in the USA. Photo by Kat.

How Was The Show?
It was good. I'd have preferred to have had a bigger crowd, but the folks running the event seemed appreciative toward the effort. As is the case for all charitable shows, the performers receive no compensation for their time and effort (except perhaps for the aforementioned karmic results), and I often contribute to these causes financially while I'm there, even though I am also donating my show itself.

But the area was on a nice and casual beachside sim, and it seemed like folks were having a good time. I was a bit concerned earlier in the day about my voice being a bit raspy, but everything was fine by the time I started my set. I always pick out a very specific list of tunes to perform during charitable shows, and each song often has some meaning to me that relates to the nature of the event. 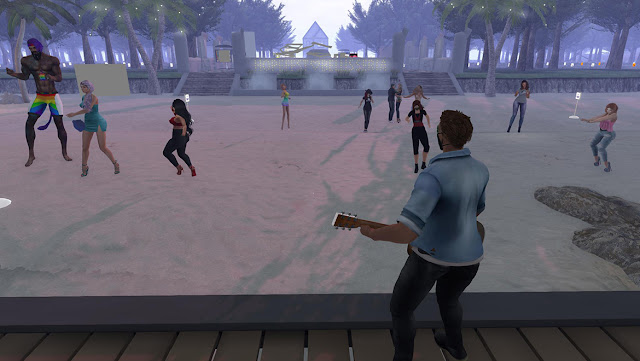 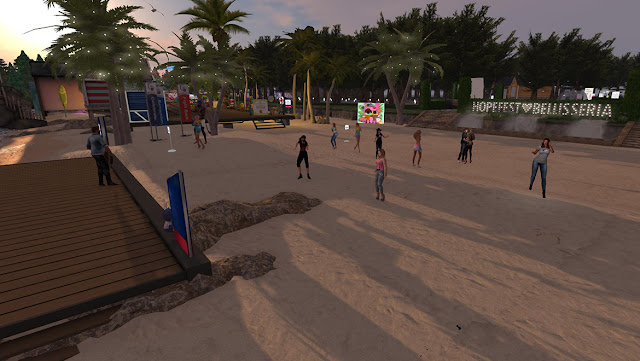 The setup at HopeFest with the Bellisseria community running things was done efficiently, and they were all nice people who were appreciative of the artists' contributions. Photo by Kat.

So, back to the beginning statement: I was more than glad to do this random Wednesday afternoon show for a great cause, and everything went very well. I have no complaints at all, and why would I? My life, compared to the huge majority of lives that have every been lived throughout history, is absolutely, amazingly great. I'm not immune from negative feelings -- no human is -- but I am at least logically aware of how good I have it, and I try and stay appreciative of that fact every day.

Big thanks to everyone who came out and donated so generously to RFL! It was a successful event from a fundraising standpoint, and that's what matters.