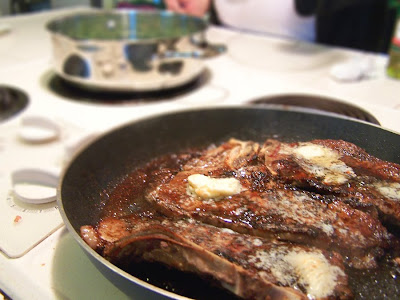 There's an old insult which applies pretty well to me: jack of all trades, master of none. And I'm okay with that. I've enjoyed having delved into a lot of different things much more than I've regretted not exploring any to its full extent. That having been said, I've never posted before about the fact that I cook, which is our off-topic post of the moment.

Yup. Zak Claxton, virtual rock star, international man of mystery, is also a damned good cook. I started cooking because I had no choice; as a kid, my folks were hard working professional people, and I was often left on my own to figure out what I was going to eat, and how. There was always plenty of food around, but not often anyone to prepare and bring it to me. So, I learned to do it myself, and have been cooking ever since. I make all kinds of stuff, from casual breakfasts to full-blown formal dinners, and have on several occasions been the chef for the large Thanksgiving meal for the family.

Kat and I look forward to our weekends together for many reasons, but one of the big ones has to be the fact that weekends are when I can spend the time to prepare a really good meal. Side note: Kat is also a good cook, and I'm not going to get into which of us is better. It's nice having two people who are competent in the kitchen in this relationship, and I'm not looking that gift horse in the mouth. We're both good cooks in different ways. Kat, for instance, made a kick-ass salmon meal (with dill and lemon) last weekend. But I digress.

My bible in the land of the stove and oven is the New York Times Cookbook, which is the same cookbook my mom used to use when she was making something special. Recently, Kat and I have taken to flipping through the NYT Cookbook and finding something interesting, then going to the store and getting the required ingredients, and making it. Our track record has been really good, with most dishes coming in somewhere between "totally freakin' amazing" and "this food is better than sex".

Yesterday, our page turning of the cookbook ended at a dish called Steak au Poivre. "Poivre" is French for pepper, and whew, we had pepper a-plenty on this yummy dish. There are a number of ways to prepare this meal, and some people do an optional cognac sauce (or add cream or dijon mustard to the sauce). We didn't, but it came out amazing nonetheless. Here's the basic recipe I used.

1. You start with steak... duh. My mom taught be one thing about cooking with meat: when you start with good meat, you have a better chance of ending up with a yummy meal. We don't have a great selection at the regular old grocery store here in the neighborhood, but were able to find some good-looking New York strip steaks. The actual recipe calls for club steaks (similar to rib eye), but any steak with a bone in it will probably be fine.

2. Coat steak in coarse pepper. I put the pepper on a plate and then rolled the steaks around. Rub the pepper into the steak using the palm of your hand. Let sit for 30 minutes.

3. Coat the bottom of a frying pan with a light layer of salt and put on high heat until the salt starts browning. Add steaks.

4. The next part depends on how rare you want your steaks. Kat and I enjoy medium rare, but we're not gourmet enough to have it basically raw in the middle (as suggested in the recipe). I let them char on one side for a couple of minutes, then flipped them.

5. Add 1 tsp butter to the top of each steak, along with lemon juice, Worcestershire sauce, and Tabasco to taste. How much? I never measure anything... after awhile of cooking, you just develop an innate sense of how much is enough.

6. Turn down the heat and allow steaks to cook through, simmering away in the delightful sauce. I took the above picture during this stage.

The proper side dish for steak au poivre is usually either baked potatoes or pomme frites (a fancy way of saying "french fries"). We went with the baked potato, and Kat made some delicious fried green beans (with olive oil and spices) that complemented the steak and potato nicely.

Bon appetit!
Posted by Zak Claxton at 9:25 AM