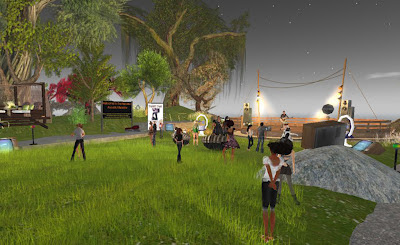 My first of two shows in Second Life on Sunday June 24 was at The Republic's Acoustic Meadow, where I'd been booked by Liz Harley to perform a full hour of original music as a benefit for Relay for Life (aka RFL). As all of you should know by now, I perform several times each year for RFL, which is the fundraising arm of the American Cancer Society.

Why do I play for RFL? I think it's pretty easy to understand. First, as a musician, one can use his or her talents in many ways. Some are selfish (i.e., getting paid to perform, having praise heaped on by fans, and so on), and there's nothing wrong with that. However, the scales of karma are best when they're even, and it's long been my opinion being gifted with the ability to sing and perform on an instrument merits some payback. Second, people need help, and if I can do something for cancer patients, even something small, simply by strumming a guitar and singing every so often, then what kind of person would I be to blow that off? 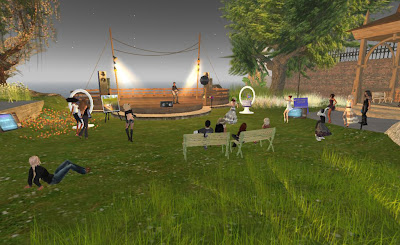 How did you spend your Sunday? Me? I cured cancer. Photo by Kat.

This particular RFL event had been set up with a cool theme: a full weekend of all original music from SL's artists who are also songwriters. Saturday's event was at Key West, while Sunday's was at Acoustic Meadow, where I'd never played before. It was cool; we had a good-sized crowd, and were very successful in the goal of the event (which was raising money, of course). I chose to play a mix of songs off my current album, and new stuff that I plan on having on the next album (whenever that gets done). 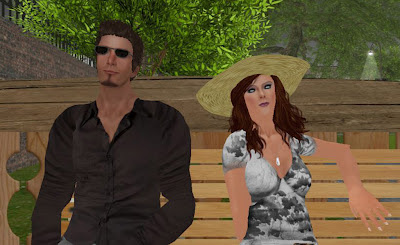 Kat and I relax in pixel form after my show. With another show to do later that evening, any time to get my energy back was appreciated. Photo by Kat.

Big thanks to everyone who came out and supported the show by donating to RFL. You're all heroes!
Posted by Zak Claxton at 8:37 AM