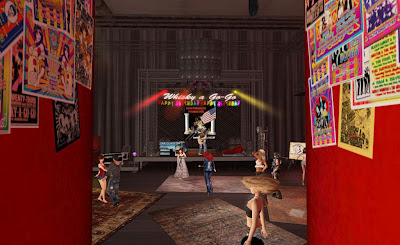 Tuesday marked my second appearance at the Whisky A Go Go in Second Life. Those of you who have been following along already know that I've got a residency there for every Tuesday evening in June at 6PM.

I have to say, it's really a good place to have a show. Cameron Trenchcoat is an experienced venue owner in SL, and he knows just how to do his part to put on an entertaining experience for the folks who come there to see their favorite performers. As I mentioned last week, the Whisky in SL is a very authentic reproduction of the famous Hollywood music club, and I enjoy tailoring my set to keep the vibe in place. Since I'm playing there weekly, I made sure to play an entirely different set of songs than I played previously. Variety is the spice of life, as they say. 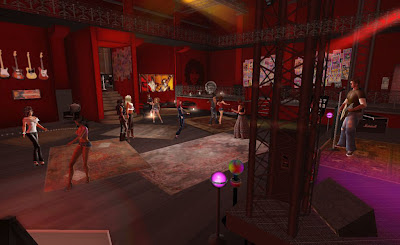 My view. Photo by Kat.

Massive thanks to all who came out to the Whisky, with special thanks to those who helped support the show!
Jenna Dirval, Annan Dreamscape, Triana Caldera, Diana Renoir, Aurelie Chenaux, Kat Claxton, TheaDee, Sesh Kamachi, Christine Haiku, my manager Maali Beck, and the chief rockmaster at the Whisky, Cameron Trenchcoat!
Posted by Zak Claxton at 10:54 AM