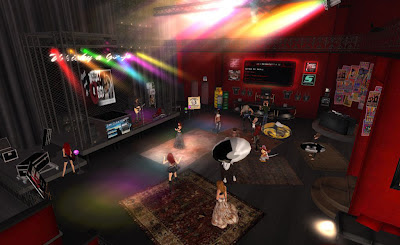 Enjoying the hell out of my Tuesday night show at the Whisky. Photo by Kat, who apologizes for not using an SL viewer that doesn't turn mesh wearers into jellybeans.

Well, well, well. The pendulum of life swings erratically. The patterns are unpredictable at best. So, just because I had a pretty shitty time trying to perform at SL9B on Monday, there's no guarantee that my following show would be good, bad, or simply mediocre. That's not how life works.

However, my show on Tuesday night at the Whisky A Go Go in Second Life was fucking phenomenal. It's not because of the crowd, which was pretty light through much of the show (after all, there's a ton of big events going on right now in SL, and one can't expect to compete even on a normal night during the packed 6PM time slot). However, it was still one of the better shows I've ever performed over the 5+ years I've been gigging in SL for one simple reason: the music.

It was one of those nights where everything was working well. The songs -- several of which I'd intended to play the day before, had my show not been truncated -- just seemed to be right. I've made it a point to make each of my shows at the Whisky completely unique, and have yet to repeat a song that I've done there in my three weekly shows so far. And while my guitar playing was far from perfect, the vibe was still good. Finally, my singing voice, which is as a big a mystery to me as anything in terms of why it sometimes is great and other times sucks, was as good as I've ever sounded. I don't know why. I really don't.

But the upshot of all this is that I enjoyed the hell out of my own show, and the folks who were there all seemed to appreciate it as well. I couldn't be happier. The satisfaction of a well-performed show trumps every other reason that artists like me perform in SL, in my opinion. We all know it's not about the money or "fame", if you can call any SL musician famous in any way. So it has to be about something... and that something is how well one can do a live performance one can be proud of for no other reason than that it exceeded their own hopefully high standards.

I'd also like to extend some kudos to the Whisky staff. Like a few other SL venues I can name, like Molaskey's Pub, the Whisky staff are cool and experienced people who never give any impression other than professionalism. Cameron and the staff there are friendly people who always seem to have their shit together. I like that. Also, it's been nice having this regular slot before Annan Dreamscape. While our musical and performance styles aren't very compatible, I've enjoyed relaxing after my show to see her in the 7PM slot.

Whisky Set List...
Day After Day (Badfinger)
*The Crystal Ship (The Doors)
Time Never Waits for You (Zak Claxton)
I Am A Child (Neil Young)
Always Tomorrow (Zak Claxton)
Wonderwall (Oasis)
Tangerine (Led Zeppelin)
Accidents Will Happen (Elvis Costello)
Come Around (Zak Claxton)
Help Me (Joni Mitchell)
The Sands of Redondo (Zak Claxton)
Tea in the Sahara (The Police)
What I Got (Sublime)

*Indicates my first time performing this song in SL. It was really good, too. I'll be pulling that out again soon.

Big thanks to everyone who came to the Whisky to see me, including the following who all helped support my show!
Kat Claxton, Cicadetta Stillwater, Mia Kitchensink, TheaDee, Annan Dreamscape, Whisky DJ and manager Dmitri Polonsky, and Cameron Trenchcoat!
Posted by Zak Claxton at 10:29 AM